Global airline capacity continues to be stuck just below the 80 million weekly seat mark, with a modest increase in capacity taking us back to 79 million, thanks largely to capacity increases in North East Asia. It is now very unlikely that we will trend back above the 80 million mark this year, as airlines adjust schedules further and store whatever cash they have generated for the winter season.

Total capacity to the year's end is currently standing at 3.7 billion seats compared to the 3.2 billion scheduled in 2020, a 15% increase in what was supposed to be the bounce-back year. When compared to 2019, that would be around a 36% drop, indicating we have a long way to go! And just to make anyone feel as depressed as a Newcastle supporter (if there are such things), airlines this week axed another 17 million seats from their schedules to the end of the year.

Incredibly, and despite everything, there are still 699 scheduled airlines operating compared to 715 at the beginning of the pandemic. This proves that the airlines have been very successful and working their way through the crisis. We sometimes forget both how important airlines are to the global economy and how resilient they are in the long-term to major global events. It may take until 2024 at the earliest for a full aviation recovery to be seen in terms of demand, but perhaps there is finally light at the end of the tunnel. 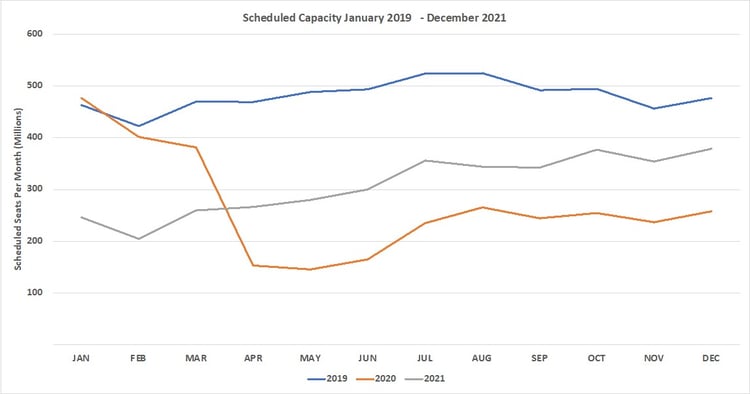 Strong growth was reported in two regions this week. South East Asia and the Southwest Pacific, where in both cases some recovery is underway, although with South East Asia at only 27% and Southwest Pacific at only 28% of their pre-pandemic capacity levels, there is a lot more capacity to be added back yet. Major legacy carriers in both regions such as Malaysia Airlines, Cathay Pacific, Singapore Airlines and Qantas that were once global carriers are now operating minimal international capacity as various lockdowns impact trade.

On a more positive note, five regional markets are now at more than 80% of their pre-Covid capacity levels, Central Asia being the closest to a full recovery, with over 90% of 2019 capacity being operated this week. Central Asia is also the smallest regional market covered, accounting for less than half of one per cent of global capacity, but that’s no reason not to strike a positive note. There is also a positive story in West Africa, where capacity is currently at 89% of 2019 levels; the region is dominated by Nigeria where, despite all the challenges of the last 18 months, Air Peace have almost doubled capacity, adding new services on a regular basis.

And finally, in the regional markets, watch out North America! North East Asia is now back within striking distance of claiming the number one regional position again, needing only a 2% increase in capacity next week to claim that spot back. With Chinese airlines adding back domestic, the excitement of who will be number one in seven days’ time is almost unbearable!

There are no changes in the top 20 country markets, but there are a few movers this week. Japan has replaced the UK in 7th position and Brazil has nudged ahead of Italy into ninth place. Six countries are now clustered in the 2.1 million to 1.8 million capacity range and further small movements are likely in the coming weeks, as Spain traditionally sees capacity cuts at the end of the summer season.

Seven of the largest country markets in the world continue to operate at less than 60% of their 2019 capacity, with Indonesia, Japan and the United Kingdom all close to or below half of their normal sizes. In all three cases, increasing rates of vaccination are not translating into increased international capacity and we will discuss this in more detail in the forthcoming OAG webinar this coming Wednesday.

Amongst the top country markets, Russia is the only country where capacity is now ahead of 2019 levels, and an impressive 26% ahead of January 2020 levels.

Delta Air Lines seem to be seeing something in the US market that the other major carriers are perhaps missing this week; the airline added back over a quarter of a million seats this week, whilst their major competitors in United and Southwest dialed back capacity slightly.

In Europe, last week saw easyJet reject an approach from an unnamed bidder, suspected to be Wizz Air. Had that been the case, and the bid successful, the combined airline would have operated around 2.1 million seats a week, placing the carrier comfortably in the top ten global list. However, and just for context, the combined entity would still have been 30% smaller than Ryanair, who we sometimes forget are currently the fifth largest airline in the world.

Despite the rather flat nature of the headline data, there are small indicators and rays of hope in the market. Vaccination rates are increasing in many country markets, some Governments have finally realised that a “zero-covid” strategy is unsustainable, some airlines are dusting down A380’s for returns to service and new airlines are getting set to launch in the next few months. If we stick with it and those small positive steps continue to grow, then who knows, 2022 may actually be a better year than 2021… it can hardly be worse.