Brave, Careless Or Confident? Getting Back In The Air

One of the questions during last weeks’ OAG webinars was from a New York-based corporate travel agent. He suggested that after 9/11 the people who got back on planes were considered “brave” but with COVID-19 those returning to the skies are deemed “careless”. It’s an interesting observation and highlights the important role that public perceptions about the safety of flying will play in helping the aviation sector return to some semblance of normalcy. Of course, what is really needed is that the public become confident travellers once again.

Each of the webinars in this COVID-19 series have tracked the impact on aviation of this crisis. Scheduled capacity is now 69% below where it was a year ago as a result of a combination of lack of demand, lack of supply and government-imposed restrictions on where people can travel.  That’s marginally better than a week ago so maybe that means we have just – and only just – turned a corner. In some markets capacity has fallen far further than 69%. As a continent Europe continues to fare worst while Chinese and US aviation has been propped up to some extent by their large domestic markets where restrictions on flying are more limited. Of course, it is also easier for a passenger with concerns about travelling to feel more confidence when travelling domestically rather than internationally; a fear of being stranded in a foreign country when there is a health emergency is understandable.

For the fifth week running, China has seen a positive improvement compared to the week before, and this week’s improvement has been the most marked yet, helped no doubt by the important Labour Day vacation. 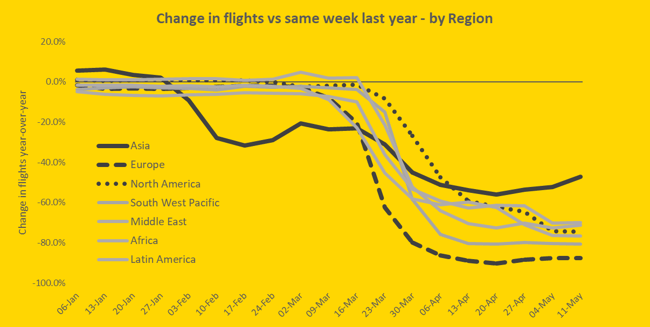 It’s not surprising, therefore, that we are all watching China for early indicators of confidence in air travel.

It shouldn’t be a surprise either that there were plenty of questions asked in the webinars this week about what measures are needed to bring confidence to the market. Some suggested the need for global standards and leadership from trade bodies and global regulators. Aviation safety has always been a high priority for those overseeing commercial aviation but it seems that those with a remit to ensure safety have been caught off-guard by this coronavirus.

While these organisations compose their guidance, some of those attending the webinars are clearly looking to airlines and airports for collaboration to ensure that everyone facilitating air passenger movements are working together. In the meantime, airlines and airports continue to announce their own measures with some seeking first-mover advantage in getting their message out first and loudest. For hub airports such as Dubai, which could see a reluctance among long haul passengers, in particular, to spend several hours of dwell time in an environment designed to mix travellers from all over the world, announcements have come early. Dubai’s announcement about testing passengers on arrival is all part of a confidence building exercise right now.

While a myriad of options are being touted in public the initial hysteria around vacant middle seats seems to have diminished as airlines take a pragmatic look at what is possible both technically and commercially. American Airlines, for instance, has said it will block half of middle seats. Southwest doesn’t assign seats but says it will reduce the total number of seats that can be booked on a flight. Some measures will be introduced more because they are visible and instil confidence than because of evidence for their efficacy. Of course, some balance will be found between processes and procedures which seriously inconvenience travellers, and a more relaxed approach to accommodating returning demand onboard flights which risks public backlash when passengers feel airlines have risked their safety.

While so many countries remain in lockdown forward bookings remain low, but in the coming weeks we should start to see more countries ease restrictions, more airlines add capacity back into their schedules and, subsequently, more booking of flights. In the United States, TSA data shows that those screened at airports is now around 8% of where it was a year ago, compared to just 4% a few weeks ago. While traveller confidence will take some time to build, airlines and airports along with the rest of the industry need to be communicating all they are doing now to convey the message that flying can be safe.