Airline Capacity Stalls As We Head Into The Summer Season

It has been one of the quietest weeks for capacity changes since early January 2019 with the number of seats falling back by some 238,000 compared to the previous week; a 0.4% reduction is nothing, but we should be seeing growth week-on-week at the moment. Just over 40% of historic capacity remains either rested or turned into scrap metal. The key issue remains the lack of international services with some 12.6 million seats scheduled for the next seven days; in January 2020 that was 41.6 million; a 70% reduction across the more profitable sectors of the industry.

With few positive indicator’s airlines continue to cut capacity for the next few months with easyJet last week announcing plans to keep capacity at around 15% of their normal capacity levels until at least June, although they did not say what year! Three million more seats have been dropped out of the market for May and cumulatively 25.3 million seats have been removed through to the end of August. June has been badly impacted this week with over 11 million seats dropped from sale. There goes my Greek holiday, thanks to the guys in orange. 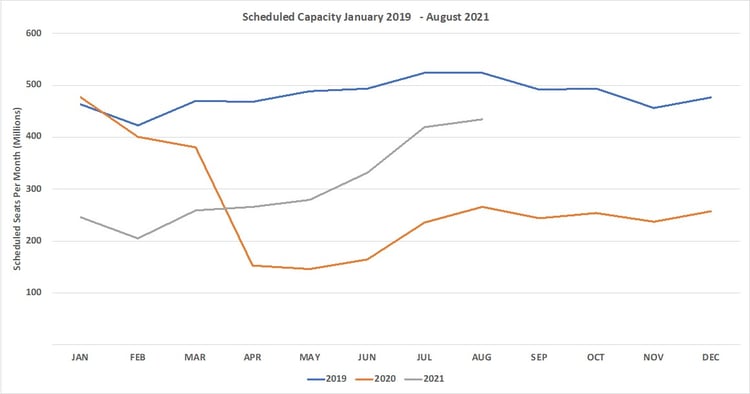 Capacity from Europe continues to grow, 440,000 more seats in Western Europe and 140,000 in Eastern Europe this week would suggest some optimism that we will have a summer season in Europe and the announcement from the European Union regarding travel across communities at the end of last week was helpful. In the UK, we continue to struggle with the definition of “essential” travel; for many people holidays, and visiting friends and relatives are considered essential unless of course, you have no friends!

The biggest capacity reduction has been in South Asia where India continues to be impacted by the continuing Covid-19 spike and we can only hope that capacity recovers quickly. Aside from South Asia other regions have also seen small reductions in capacity and half of the global regional markets saw reductions in weekly seats; things will get better won’t they, it’s just a matter of time surely?

Rather than confirm that China remains the largest country market and the United States is second (which they are), we have instead taken a look at some major international country markets to just highlight the challenges and scale of capacity recovery still required.

The table below shows the ten largest country markets as of January 2019 on a weekly basis and the current level of seats on sale. Only the United States – Mexico market has seen growth (+7.5%) as a result of other international markets being closed and the Mexican Governments continued opening through the pandemic. Half of the largest country-to-country markets are operating with less than 10% of their normal capacity and only Germany – Spain and Germany – UK show any signs of recovery; there must be a lot of “essential” travel from the UK for that to be possible!

Since there is also little change amongst the airlines, we would be repeating ourselves to confirm that American Airlines are still the largest carrier based on capacity and that Delta Air Lines have not made any progress in taking back first place. So, instead we have used the OAG “snapshot” database to see which airlines have made the most capacity changes in the last two weeks since it provides a different perspective on how some carriers are looking at the next few months. The table below shows the changes in planned capacity, expressed as a percentage for a range of airlines through to the end of August.

Airlines continue to make significant adjustments to their planned capacity, in part finessing schedules that had been loaded and were “sitting on sale” and in part recognising that the summer season will be softer than originally anticipated. Both Singapore Airlines and Finnair, carriers reliant on the Asian market for large proportions of their revenues have made cuts of over 50% in their planned capacity for the next three months. The return of international services in Asia continues to be a problem with the Singapore – Hong Kong bubble again bursting last week, achieving a zero rate of Covid-19 is a commendable objective if wholly unrealistic in a globally connected world.

The lack of a real recovery in global capacity frequently disguises those markets where we see some growth over a few weeks whilst other markets experience another Covid-19 spike resulting in a flat-line of capacity. At the moment the spike is in India, but Europe and Latin America have experienced such events as well.

Looking at positive stories then the US Domestic market is perhaps the best indicator of how a recovery can develop. Since February US Domestic capacity has increased by 67% but continues to be 15% below 2019 levels, however, the gap is narrowing and could by the end of the summer season be less than 10% if international services are restored and connecting flows once again made possible. 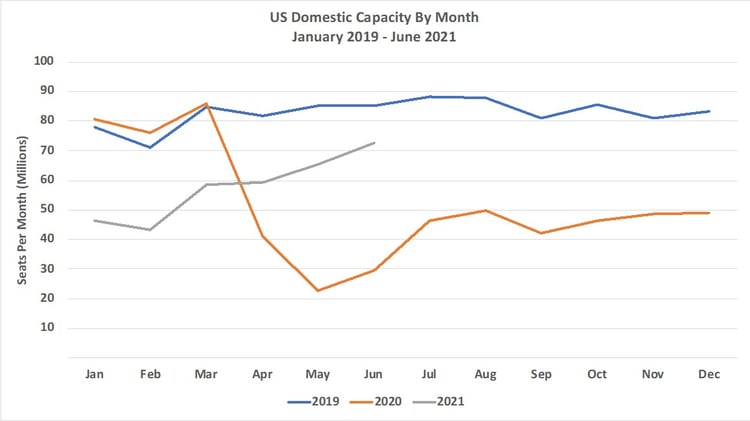 On an equally positive note, there continues to be a long queue of new airlines seeking to launch with both Avelo and Breeze in the United States making progress and adding competition. New routes are also being announced with JetBlue finally declaring their hand for services from New York JFK to London Heathrow and Gatwick; the first planned service is in August; have they been tipped off on an opening date for the US market reopening?