Coronavirus - Tracking Down the Bug

It’s the first quarter of the new decade and we have the first medical alert as China deals with a new strain of coronavirus or to give it its more medical name, 2019-nCoV. When such an event occurs (and they do most years) news spreads faster than the virus itself and speculation around the virus multiples at a faster rate than the germ.

However, the World Health Organisation (WHO) are considering declaring an international public health emergency, so we’ve used our data to assess some of the key aviation points.

Our schedules data for the first quarter of this year shows that nearly 90% of all capacity offered is to other cities in China and that the two largest international markets are Thailand with nearly 107,000 seats and Japan with some 67,000 seats available. Singapore has some 42,000 seats and Chinese Taipei 29,000 and then some 17 other countries including long-haul markets such as the United States of America, United Kingdom and Australia.

In total there are some twenty-one countries with direct flights from Wuhan and some thirty-three international airports that are served which from a control perspective would make it relatively simple to isolate arriving flights and undertake any health screening considered necessary. However, whilst capacity data gives us an idea of where travellers are destined it is only when we look at booking data that we get a clear picture of demand and the ultimate destination of travellers.

Using the first quarter of 2019 as a proxy for likely travel patterns this year, we have identified the top ten countries and cities for international bookings from Wuhan.

Bangkok is clearly the major international destination for traffic to and from Wuhan with on average around 545 arrivals each day in the first quarter of 2019 spread across both airports. Hong Kong, the second largest market with some 22,000 arrivals may actually be significantly down in bookings this year given the unrest in the city and its impact on demand.

For many travellers using a connecting airport may be the only way to reach a destination whilst for others it may represent the cheapest fare on offer. Therefore, tracking the major gateways for bookings from Wuhan is an important part of any containment programme.

Six of the top ten gateway cities for bookings travelling to international destinations are actually located in China with Guangzhou the key gateway. Use of OAG’s data therefore indicates that domestic flights from Wuhan to these points should also be checked for passengers showing symptoms of the virus. 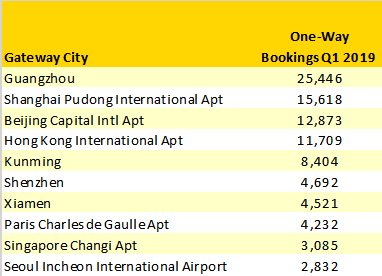 Ultimately as the WHO advice confirms air travel might contribute to the spread of influenza in future pandemics but restrictions on air travel would not alone provide effective control. However, for authorities and health agencies rapid access to OAG schedules and traffic data and moments such as these becomes a key part of the wider defence processes put in place.