Western Australia – A Minefield of Trends and a Glimmer of Hope 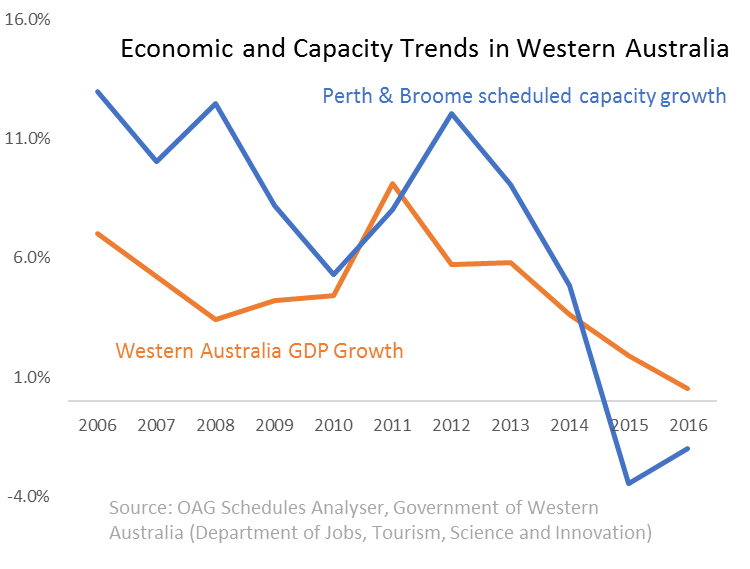 The two largest airports in Western Australia, Perth and Broome, have seen scheduled aviation capacity decline this year. At Perth, capacity is down by 2.1% for the year-to-date, and the same figure for Broome is 2.4%. If the year continues like this, 2017 will see capacity somewhere between what it was in 2012 and 2013.  That’s a lot of years with effectively no growth and bucks the trend in most major developed countries.

With Qantas planning to operate a headline-grabbing, non-stop, 14,498km Kangaroo route between Perth and London from March 2018, it would be right to ask if the timing is right. But the capacity trend is just one trend among many. Unpicking what those trends are and what they mean for air service development reveals an opportunity.

The primary cause for the stagnant capacity growth is the ailing Western Australia economy. While the State rode the boom that came with mining and mineral extraction investment, capacity grew. Now that the boom has ended, Western Australia’s economy has slowed, now lagging other Australian states. No doubt this has affected outbound travel, both for leisure and business, as well as inbound business traffic with an impact on scheduled capacity.

What Perth and Broome face is not new - or impossible. Cities such as Houston, Edmonton and Dubai have all had to find new drivers of growth when the good times associated with oil and gas began to fade. Western Australia already has a tourism industry and so it makes sense that aviation will play a part in growing that.

The good news is that international tourism to Western Australia has been growing. According to the International Visitor Survey produced by Tourism Research Australia, international visitors to Western Australia grew by 27.4% between 2012 and 2016. The top four international markets for airline capacity to and from Perth are Singapore, which accounts for a quarter (24%) of all international seats, then Indonesia (21%), Malaysia (16%) and United Arab Emirates (15%). Each of these markets has seen capacity rise over the past 12 months – up 2.4%, 6.1%, 10.5% and 6.5% respectively.

With both Singapore and Dubai major hubs for Europe-to-Australia traffic, it is clear that growth in the market is precisely where the new Qantas service will be targeting.

A daily B787 service, as proposed, will add over 85,000 seats each way in a market where, according to OAG traffic Analyser, 98,136 people travelled via one or more intermediary hub airports from London to Perth in the past year, and as many travelled the other way.

21% of journeys were via Singapore, while 57% flew via one of the big three Middle East hub airports of Dubai, Abu Dhabi or Doha. 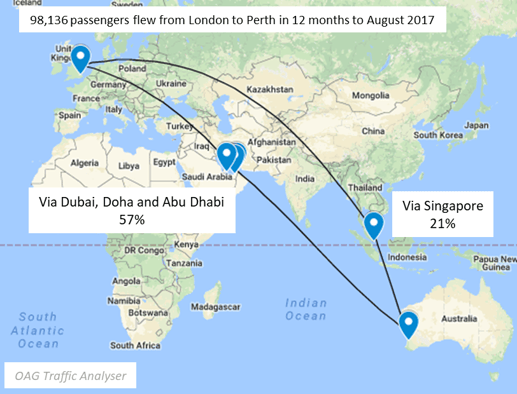 With the end of the mining boom, the Australian dollar has fallen from its high point and the money that European tourists have to spend is going that much further in Australia. It looks like maybe Qantas has its timing right after all.