The Empty Middle Seat: The Stuff of Dreams

There have been few pleasurable moments around a low-cost airline experience, but the vacant middle seat was one. The almost smug acknowledgement to the other person across that huge seventeen-inch gap; the placing of some papers on the spare seat or even for me the stretch across into ‘neutral’ territory were small victories. We have all admired, sometimes reluctantly the success of the low-cost airline model and especially their ability to create demand even on the dreariest of days; Ryanair’s average load factor is 98% (apparently) easyJet’s 91% and Southwest 84%. These airlines certainly knew how to cram us in, but what of the future?

The Middle Seat Dilemma – never the most popular seat, passengers with a “B” or an “E” were branded from the first “excuse me” through to the “would you mind” as they escaped to the toilet. Whoever selected the middle seat through choice?

In the last few months we have been both exposed to a once in a century pandemic, made “unprecedented” fashionable and added social distancing to our behaviour; an emoji will undoubtedly follow for regular use in the next release. And we may at least for some time mentally have removed the middle seat from most commercial aircraft for at least the next few months.

As we’ve been locked down airlines have been looking at how they can entice us back to travel, how can they build our confidence and reassure us that the risk of exposure to COVID-19 is minimised. One answer is to leave the middle seat empty in our new normal world. Or is it an answer…

Do We Even Need A Middle Seat? – at OAG we’ve tracked the reductions in global capacity on a weekly basis, you may have seen some of our blogs; the numbers and pace of change are astonishing, bare credible but very real. Those numbers only tell half the story, demand not only fell off a cliff it dived to the bottom of the sea. We have all seen images of the one commercial passenger on a flight, daily load factors of less than 15% compared to over 85% this time last year, the TSA data on daily passengers processed. There has been no demand to speak of and the initial offers of ‘cabbage fares’ in China and more recently ‘vegetable fares’ say everything about where demand is today.

All of which begs the question will there be anyone to fill the middle seat, especially during the rebuild phase out of the COVID-19 event? Predicting likely demand as we move forward is almost impossible and building confidence back in the whole aviation product will take time and a lot of creative solutions at airports, airlines and all travel related suppliers. In such context the suggestion of leaving the middle seat empty is perhaps both a great sound bite for the airlines and a reassuring blanket (sold for £7) for those few passengers travelling. But perhaps even more importantly is it even sustainable?

Paying For Empty Space – ultimately low-cost airlines exist because they are very successful at what they do, creating demand, filling planes and maximising revenues and subsequent profitability. LCC’s are businesses tasked with delivering shareholder value and profit; leaving one-third of your stock unavailable for sale is unrealistic; unless of course you charge extra for those seats that are sold. So, here’s some headline analysis of what that would mean.

For five of the largest low-cost airlines operating around the globe we identified their average yield per passenger and then assuming a requirement to retain the same levels of revenue what the impact on passenger yields would be for each airline. In summary, every passenger would need to pay 52% more than they currently do to fill the revenue gap that would be created by leaving the middle seat empty. Is that realistic, will passengers pay that much more or is the risk too great for airlines that typically stimulate demand through price? 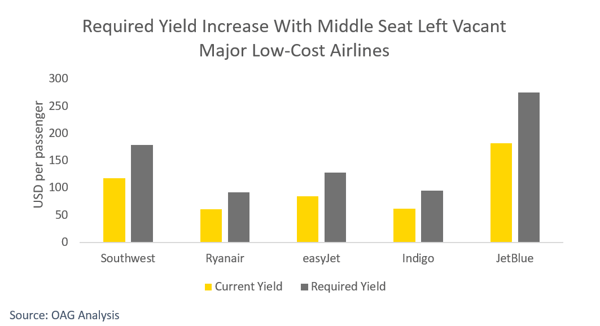 What Will Be The Demand Recovery Strategy? – There are perhaps two broad options for the airlines as they seek to generate revenue. Either assume demand will be inelastic and therefore price pretty high believing that those who travel are travelling through necessity or equally demand is elastic, and some really aggressive pricing will stimulate demand and revenue. Of course, the key is which option generates the most revenue and ultimate profitability for the airline. For the low-cost airlines there is probably a clue in the descriptor; low-cost aggressive market stimulation and create demand; that strategy does not sit comfortably (excuse the pun) with an empty middle seat.

No doubt as demand recovers there will be many empty middle seats and there will be many travellers reassured by that fact who may smile a little more than usual at the thought of stretching out. However, enjoy it whilst you can because as demand recovers and it surely will at some point, that middle seat will once again be occupied and we will all grudgingly accept the experience; after all price has and most likely will always be king.