The A220, Versatile Performer….Flexible Friend

It’s challenging introducing any new aircraft type as most aircraft manufacturers will confirm but whilst later to market than expected the original Bombardier C Series now marketed as the A220 seems to have been well received by both operators and customers alike.

The addition of Air Austral in October to the A220 order book brings the total of orders placed to over 525 across 23 companies including lessors. From a late 2016 commercial launch with Air Baltic and Swissair the aircraft has rapidly grown into a valuable mid-sized aircraft for many airlines.

The speed with which the A220 has entered service has been dramatic, from 25,879 scheduled flights in 2017, the first full year of operation to 126,279 in 2019 represents a near five-fold increase in two years. In just the last year the number of services operated doubled and similar levels of growth can be expected in the next few years as more aircraft come online to carriers around the globe.

The breadth of the A220 operations are best reflected by looking at the evolution of the network in just a two-year period. From purely a European network with an interesting almost “long-haul” service from Riga to Abu Dhabi the aircraft has spreadits wings. The “network” map below shows just how far and quickly the aircraft has entered other markets; North America with Delta Air Lines, Korean Air and Air Tanzania with an exciting venture with Air Vanuatu shortly to begin. 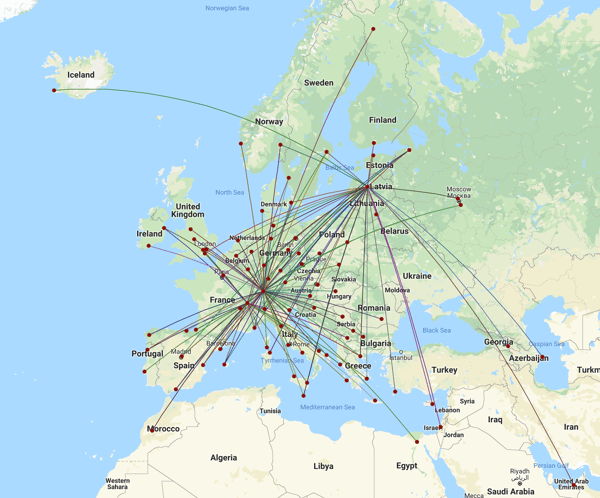 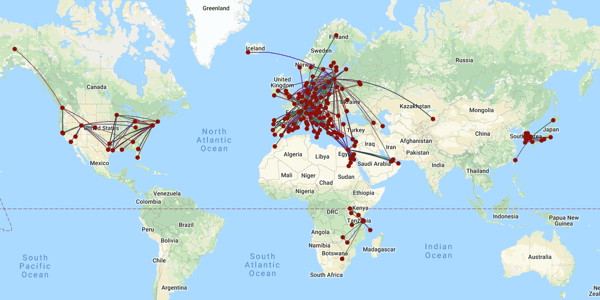 Part of the attraction of the aircraft is the flexibility of operational range. Air Baltic are operating scheduled services from Riga to Abu Dhabi (2,358 NM’s) a sector length of some six hours. Equally at the other end of the spectrum, Swissair are using the same aircraft for a 78 nautical mile sector from Zurich to Stuttgart.

Delta Air Lines are also a flexible operator of the aircraft, at one extreme operating a 1,723 NM sector from New York JFK to Salt Lake City taking 5 hours and 30 minutes to a short hop sector of 160 NM’s taking 1 hour and 22 minutes.

For an airline network planner having an aircraft that has such operational flexibility and at the same time can provide high levels of customer acceptance is very useful both from the basis of adding additional off-peak services and developing new services.

For some reason new aircraft types attract increased attention from aircraft spotters hoping to see both new aircraft and the increasingly frequent special liveries that airlines introduce at such time. So, where exactly can you spot the plane?

Although it may be expensive for a hotel room, Zurich is the most likely place to see the aircraft with some 47 departures a day. However, Riga would represent for many a cheaper alternate and with 30 departures a day offers plenty of scope to grab that all important picture and registration.

Patience may also be a virtue in grabbing sight of the aircraft. In 2019 some thirty-seven aircraft were delivered, with a modest increase in production another forty aircraft in operation could comfortably deliver an additional 80,000 scheduled flights in a full year of operation. And with Air Vanuatu taking delivery of their first aircraft in June 2020 then waiting to capture a shot in Port Vila may be a more exotic option for some.

The rate of change in the aviation industry can sometimes result in a new aircraft missing the market; just ask Airbus and the A380 production programme. In the case of the A220 or originally the Bombardier C series the aircraft may actually be ideally placed to how the market is developing; sufficiently flexible in operational range, in demand around the globe and with a very strong and growing order book makes for a snappy proposition.