The challenges of being a mid-size carrier in a market seeking consolidation probably accounted for Air Europa’s decision to accept the latest offer from IAG. Whilst some 44 aircraft in operation and an order book of 30 suggests Air Europa is an airline of some scale, its 1% share of Western European airline capacity places them in the same space as carriers such as Aer Lingus.

The planned acquisition does however have some interesting aspects both within the Spanish domestic market, and also the South American market where the Madrid hub of both airlines dominates many traffic flows.

Whilst Ryanair are the largest single airline operating today from Spain with 17.4% of capacity, the combined capacity for Vueling, Iberia and now Air Europa equates to some 38.6%. Add in the British Airways and Aer Lingus parts of the IAG business and that share increases to 40.5%.

Within the Spanish domestic market that share increases to 72.6% although the power of the AVE train network would suggest that much of this capacity has a connecting element. On two of the major domestic markets the new combined IAG share on BCN – PMI reaches 78.9% and on PMI – MAD 60.6% of capacity in the market.

Madrid has long been recognised as the key European gateway to South America and under a combined IAG ownership Iberia and Air Europa operate around 65.3% of current capacity. Currently a member of OneWorld (although they are soon to leave for Skyteam), LATAM have a 9.1% share of capacity and the addition of Air Europa would have meant the OneWorld Alliance would have operated nearly three-quarters of all capacity.

Network coverage across Iberia and Air Europa to Latin America perhaps not surprisingly highlights some 12 cities in Latin America and the Caribbean that the two airlines both serve as the map below illustrates. 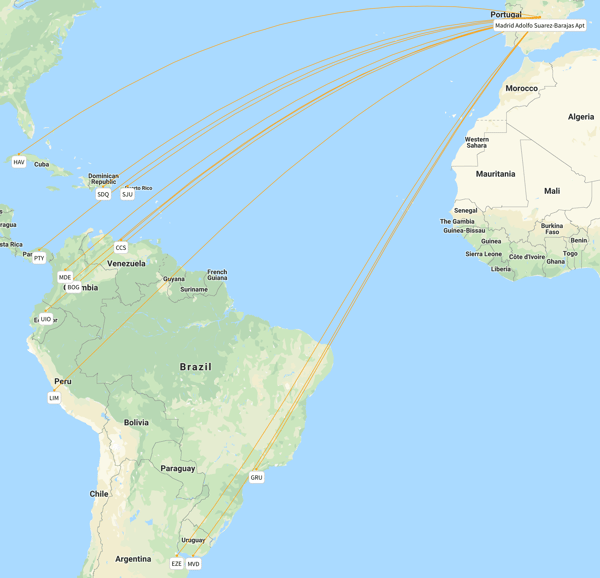 Duplication of destinations is not a great surprise.  Serving the largest population centres is what you would expect; that is part of the competitive element to the market as is the scheduling and that is perhaps where there may be some network realignment required. In the table below we have listed the scheduled departure times from Madrid to all twelve cities.

Generally, to the mid-Atlantic markets Iberia tends to depart anywhere between two to three hours earlier than Air Europa as each carrier feeds their networks with connecting traffic. However, to the lower-Atlantic markets the scheduling of the two airlines is almost identical and this will perhaps need to be adjusted at an early stage to both increase consumer choice and avoid any criticism from other competing carriers.

From a competitive perspective there have already been calls for the acquisition to be investigated with Ryanair at the front of the queue. A key consideration could be network duplication. In 2019, Air Europa operated to some 148 airport pairs; 76 of those (51%) are also operated by Iberia and some 55 airport pairs (37%) by Vueling. Quite what criteria the regulator will look as part of the approval process remains to be seen but it would certainly appear that at least at an ownership level there will be less competition in the Spanish market should the acquisition proceed.

We have noted before that mid-market size carriers are at the most risk during an inevitable period of airline consolidation, the difficulties of trading and an uncertain winter demand profile impact operating performance of many carriers. Air Europa have for many years been widely regarded as a well-managed airline and yet they have finally accepted the longer-term challenges of surviving in a consolidating market.

This news may just be the first of a few interesting consolidation or acquisition plays over the next few months making for an interesting paella for both the regulator and analyst to digest.