As airlines seek to work their way through the COVID-19 both adhering to travel bans and repatriating nationals this week’s numbers are stark. In one week some twenty-one million seats were dropped around the globe as the industry fights its own battle for survival. A 23% capacity reduction in one week leaves us with some 37 million fewer seats than some ten weeks ago; some 35% of capacity has been wiped out and more is likely to follow in the coming weeks as airlines continually adjust their schedules. 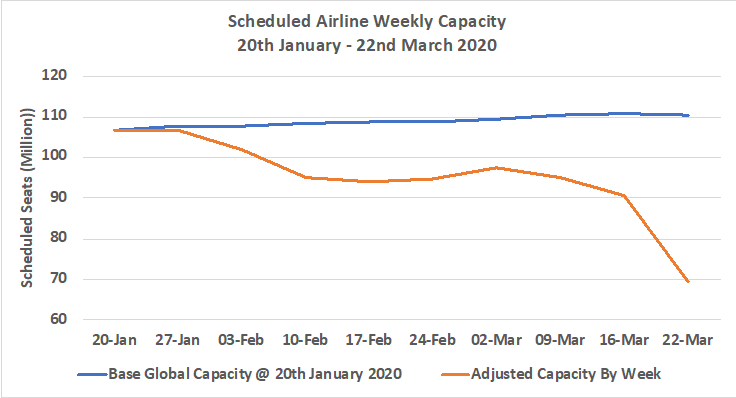 Looking first at the largest regional markets in the table below the scale of change becomes immediately obvious. Capacity in Western Europe down by 53% in seven days, Latin America down 42% and the Middle East 33% and that’s before the announcement of emirates suspending services later this week.

Those looking for the shoots of recovery will immediately focus on China where a further 217,000 domestic seats could be seen as positive against what is a dramatic situation. Capacity from the United States will continue to decline as the major carrier’s worth through the precise detail of their already announced cutbacks. We had previously noted that country markets such as India, Indonesia and Brazil had not seen significant capacity cuts; this week that changed!

In terms of percentage changes looking at those country markets with more than 100,000 seats a week there are some dramatic adjustments with Peru seeing a 71% fall in capacity and Spain seeing a 1.5 million fall in weekly capacity and Malaysia over 600,000 fewer seats scheduled.

Reporting the data by the worlds current ten largest airlines includes some carriers that maybe surprised to be in such company; Alaska Airlines held 19th place ten weeks ago; they are now in tenth position. Globally recognised airlines such as Ryanair, easyJet, Turkish Airlines and British Airways have all fallen significantly, although they have other things to worry about at the moment.

Perhaps the biggest concern is that the current “top four” airlines are still supplying OAG with their latest schedule changes and the record week on week capacity reductions we have seen EXCLUDE the majority of cuts those airlines have announced but are still working through. Put another way; next week could be as bad as this week, if not worse.

Ryanair have always had a reputation for ruthless action, a 1.5 million cut in capacity over the week and a near 84% cut in scheduled capacity reaffirms that but for sadly all the wrong reasons. Seven of the top ten airlines cutting capacity are based in Europe which has seen some 8.5 million seats removed from the weekly programmes.

Week ten of COVID-19 is the worst weeks data during the “event” and next week’s promises to be similar. Personally, I have never seen such a situation and as those of you who know me will confirm; that’s a long long time. I equally know and the OAG data will in time confirm that the industry will return, it always does. I just can’t wait to report on those positives.