Shake Up In South America

No part of the world is immune from the impact of COVID-19. Aviation in South America is reeling just as aviation elsewhere is, and the scale of the shock to airline operations and networks is comparable. However, while North America and Europe have seen significant government support for airlines, the same cannot be said of South America. This will be an important factor in how the industry on these continents will emerge from the pandemic. While subsidies provide some stability and continuity to established airlines in mature markets, the lack of subsidy will speed some airline failures.
What it will also do is provide an opportunity for new entrants with business models better suited to the new operating environment. And in a post-covid world, many of the barriers to entry for new airlines will be lower than they have been for some time. For countries such as Ecuador which have been hit hard by the failure of airlines in the past 6 weeks, there is still a chance that something good could come of this.

Capacity Fell off a Cliff

Since the first week of April, scheduled flights to and from the ten largest country markets in South America have been down by between 80% and 90% year-over-year. The drop came sharply and, overall, has yet to show signs of recovery. 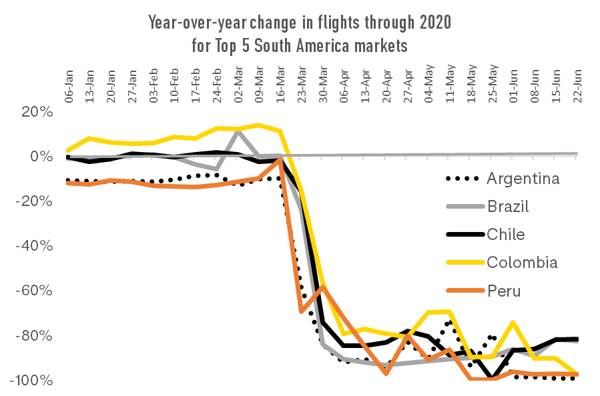 At the moment Argentina, Colombia and Peru have less than 3% of the operations there were a year ago; aviation is virtually at a standstill. Brazil and Chile are faring a little better, if 20% of former capacity is considered better. Only Bolivia and Venezuela have limited the impact to under 50% of flights but these are significantly smaller markets. 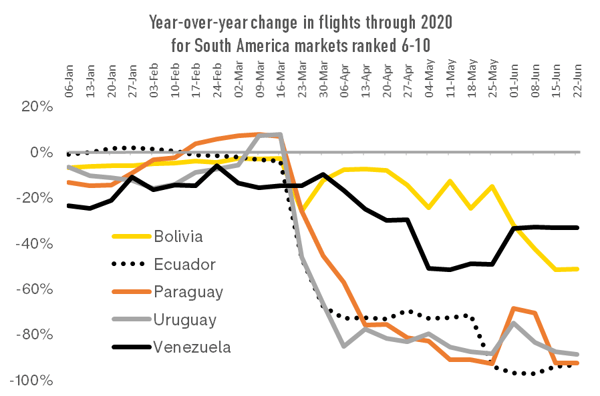 A common observation in other parts of the world has been the relative protection afforded to countries with large domestic markets; the US and China are the primary examples. However, across these 10 South American countries, domestic capacity accounted for 80% of all airline seats in 2019, yet even Brazil with its large domestic market has seen a massive drop in airline activity. 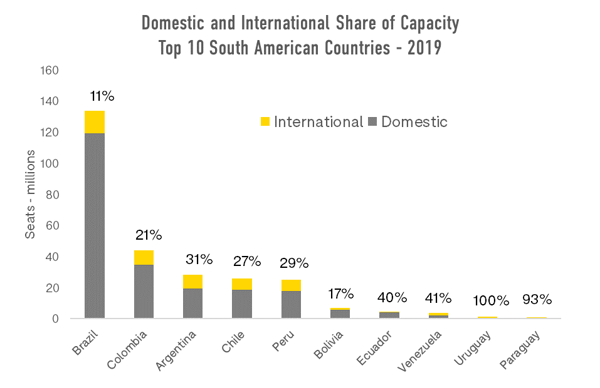 Only 11% of airline capacity in Brazil was for international flying with the bulk of the 134 million seats in 2019 operating within the country.

The reason for this, in large measure, is the impact of airline failures.

In recent weeks both LATAM and Avianca have entered bankruptcy protection. While LATAM may emerge with the help of supportive shareholders, the situation for Avianca is less clear. The airline spent much of 2019 restructuring debt and suffered further when the Colombian government closed Colombian airspace in response to COVID-19. Smaller but important for Ecuador, TAME also ceased trading in May as the Ecuadorian government decide to liquidate the airline.

In 2019, these three airlines contributed 43% of all scheduled capacity across these 10 countries. It’s no wonder that aviation is reeling. In Brazil, the largest market by far, they have accounted for a third of all capacity but elsewhere, in Columbia, Chile and Peru, they operated three in every five seats or more. Their disappearance if they fail to emerge from bankruptcy protection will leave a significant hole in South American aviation. 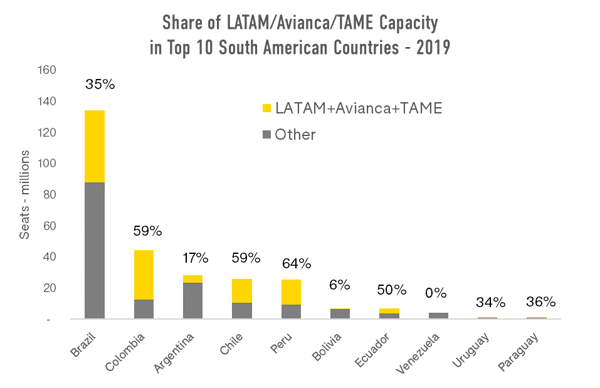 Barriers to entry coming down

This does, however, provide opportunities. The barriers to entry for a new airline may not have been so low in many years. With so many aircraft parked up at airfields around the world, there may be an abundance of planes available for a start-up. Equally, the general down-sizing of the industry may mean that there are qualified flight crew readily available. The price of fuel, always a major factor, has dropped well below the norm in recent history. And competition may be exhausted. Existing competitor airlines will be working to recover rather than expand, aiming to build balance sheets before focussing on growth. 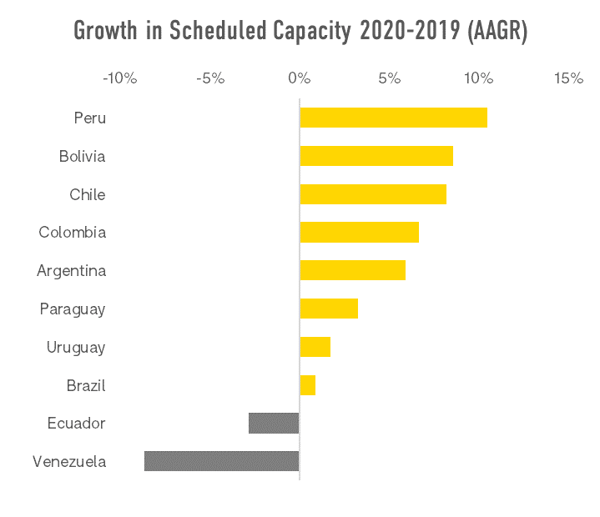 A look at Ecuador, for example, shows that the country has more potential for air services than is recognised by the actual services that have been operating. Since 2010, commercial capacity averaged a decline of 2.8% each year. In contrast, neighbouring Peru has seen capacity grow on average at 10.5% each year. Bolivia, Chile, Colombia and Argentina have also experienced growth of more than 5% per annum.

Looking at the average propensity to fly for Ecuador, expressed as a ratio of the number of airline bookings to the population size, Ecuador, along with Argentina, Uruguay, Paraguay and Venezeula, could all have increased flying in a pre-covid world. 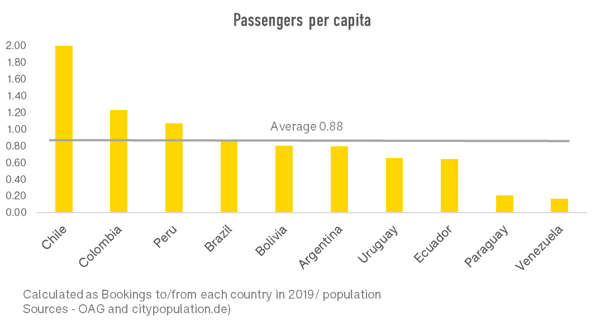 Just as everywhere else, aviation in South America is in the midst of a major shock. It’s too soon to have any sense of what the market will look like in a year, or two or three. However, the failure, or potential failure, of some major players has the potential to create new opportunities for investors who can look at this market with fresh eyes.