At their training camps across Japan, the 20 national teams waiting for the Rugby World Cup to kick off will undoubtedly be feeling some pre-tournament nerves. They’ll all hoping they can kick those jitters into touch and none more than New Zealand, the current trophy holders.

With 48 games to be played in the run up to the final on 2 November, fans from around the world are already making their way to Japan.  What better way for Japan to try out its ability to manage big sporting events, with the 2020 Olympics just around the corner?  In 2015 an estimated 0.46m fans travelled from overseas to the UK for the Rugby World Cup and this time round is likely to be no different with ticket sales at 96% with just days to go. 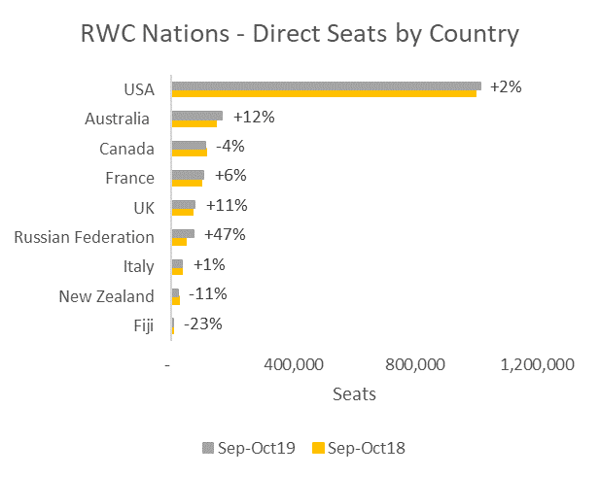 Perhaps surprisingly though, only 8 of the 20 participating countries have direct air services to Japan and we know from analysis of previous sporting events that airlines typically prefer to maximise yield rather than take the risk of adding more capacity.  A quick look at the schedule for September and October shows strong capacity growth from Russia, Australia and the UK so perhaps there is a rugby effect after all.

Even the Springboks supporters face an indirect journey to Japan, joining the 31,000 travellers who last year had to take an indirect routing between South Africa and Japan and facing one of the longest journeys with South Africa nearly 8,400 miles away from Japan. Another mainstream rugby nation, Argentina, will see its fans most likely route through the US as they make their way over 11,400 miles to Argentina’s opening game against France in Tokyo’s Ajinomoto stadium on the first day of the tournament. Spare a thought too for those supporters from Georgia, Namibia, Samoa and Uruguay who face little prospect of their team going past the group stages but are undertaking a long indirect journey to see their country play on the world stage. Even if they were to fly direct, Uruguay fans face the longest journey as the country is 11,500 miles away from Japan.  Let’s hope they have a smooth touchdown once they get there!