Global airline capacity has fallen this week as the impact of travel restrictions begins to be felt across the European market with 3.4 million fewer seats in Western Europe and 720,000 fewer in Eastern Europe.

Ryanair did warn us all that this was going to happen, and it has - a 24% reduction in Western Europe and 20% in Eastern Europe. It’s slightly ironic that last week the UK Minister of Transport eased travel testing requirements around the Omicron variant just as capacity was cut, finger on the pulse and UK Government decisions have never been aligned during the pandemic, have they? In the first week of 2019 global airline capacity sat at 104.8 million and in the second week of that year capacity dipped down to 104.3 million; a cut of half a million. This year it's seven times worse than that “normal” pattern.

Total capacity for this week has fallen back to just under 78 million seats which represents a 7.2% cut over last week, which is one of the largest week-on-week drops in the last six months. Capacity is now some 28% below the pre-pandemic levels and fifteen of the seventeen global regions reported cuts in capacity. Only North and South East Asia reported growth, and in both cases just a few percentage points. Looking beyond this week across the first quarter of the year, nearly seventeen million seats were removed for sale making last week one of the busiest for network planners in recent times and sending a sharp shock to all industry followers. Current capacity for February stands at 346.9 million compared to 204.9 million last year so for the optimistic half-full reader that is an improvement of 70% year on year; and for the half-empty reader 14% below the 2020 high watermark. 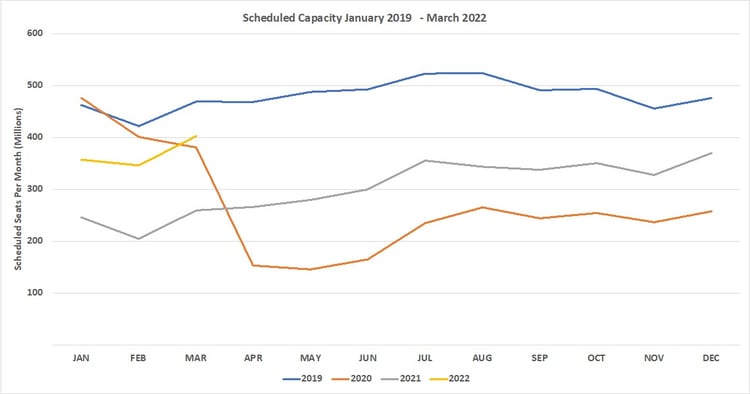 As already mentioned, this week is a disaster for European capacity, but other regions are also suffering. North (-11%) and Southern (-6%) Africa are both down week-on-week and with the seasonal holiday period now over Caribbean capacity is down by 7% and the Southwest Pacific region which had been growing rapidly in recent weeks has fallen back by some 13%. Nearly two years into the pandemic there remain five major regions where capacity is at less than 60% of normal levels; South East Asia is now “leading” the list of capacity losers with only 47% of seats back on sale while in absolute terms Western Europe is “only” 7.8 million seats adrift of its normal levels.

Although the Top Twenty Country Markets are unchanged from last week there has been quite a bit of movement amongst the placings. Last week Indonesia was in eighth place; this week it has moved up into sixth place with another 24,000 seats a week added. Driving the increased placing are a number of surrounding markets reporting dramatic cuts in capacity and slipping down the charts. In Europe, UK capacity is down by 31%, Italy by 30%, Spain by 27% and Germany by 22%; add the 19% reduction in France and all major markets in Western Europe are moving in the wrong direction. Last week Spain was Western Europe’s largest country market in seventh place, it remains the leading country market but has fallen to the ninth position.

Airlines will naturally be cautious about adding capacity back in the next few weeks and certainly until the middle of February - the next school holiday period. Any increases in capacity are increasingly unlikely without some positive news about global infection and transmission rates.

We mentioned last week that Ryanair were as good as their word over the seasonal holiday period and have cut capacity this week by 44%, the sort of levels we were seeing at the beginning of the Covid crisis two years ago. Both EasyJet and Wizzair have vanished from the top 20 airline ranking, easyJet are now in 35th place and behind British Airways while Wizzair have slipped back to 38th place. Airlines such as EasyJet and Wizzair can add capacity back very quickly across their numerous bases in Europe - if they will do so before late March is another question.

This week’s data is unfortunately very much in line with what we were expecting to see once network planners had returned to work. Global airline capacity dropping back to 78 million seats is clearly a setback although not unexpected given the rapid spread of the Omicron variant. Every airline around the world is walking a tightrope of managing capacity, ensuring resources are available to operate services, and of course matching capacity to demand as best you can in the first quarter of the year. Fortunately, by this stage of the pandemic, there are hardly any events or situations that airlines haven’t already had to face and work their way through, and as I said last week if we look into the second quarter of the year then things are looking more positive than they have in the last two years. We just have to be patient!