2021 Global Airline Capacity Finished at 5.7 Billion, 35% Down on Pre-COVID Levels

The devil really is in the data this week, or to be more precise it is behind the data, but let’s start by looking at how 2021 finished. Global airline capacity ended at 5.7 billion seats compared to the 8.7 billion reported in 2019, so 35% below pre-Covid levels, and of course, demand is much lower for those 5.7 billion seats.

Positively, the second half of 2021 saw a stronger recovery than the first half, and global domestic capacity was at 80% of 2019 levels thanks to markets such as China, the United States and Russia. So, things were slowly improving although there was a long road ahead and then Omicron arrived, and you would expect global capacity to be badly damaged, wouldn’t you? But the data suggest otherwise so far, although we expect that to change this week.

With seasonal holidays out of the way airlines are now once again removing planned airline capacity for the first quarter of the year, some 11.4 million seats have been removed since the middle of December and we can expect a lot more to drop out of the system in the next few weeks. That said, total capacity in January is currently 50% above last year’s level, 366.4 million compared to 246.5 million last year, look hard enough and there is always a positive message buried in the data. 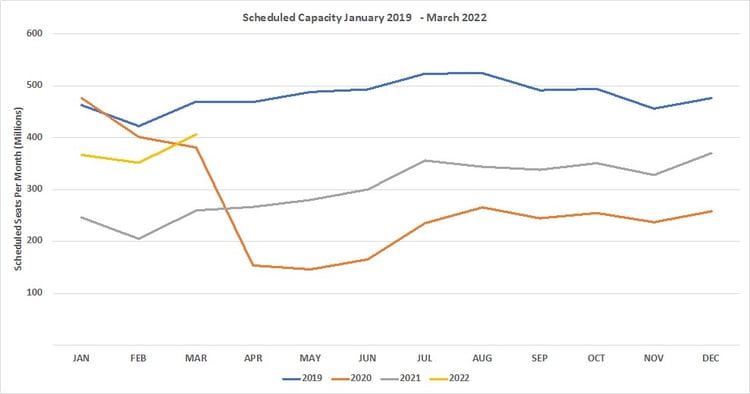 The headlines in the last few days have all been around cancellations because of staff shortages and severe weather storms hitting the United States, but the data currently filed by the airlines shows a slightly more optimistic picture. In truth, staff shortages and weather disruption cannot be scheduled, all those cancellations that we are reading about are undertaken at short notice and handled operationally rather than in the data filed for scheduled services. We will look at how cancellations have impacted markets and airlines in a blog later this week, assuming we have the resources, and the weather is fine!

With nearly 84 million seats scheduled for operation this week, global airline capacity is up by 375,000 in the last week - as airlines originally planned to get everyone back home ready to start work once again. Slight reductions in North American capacity are reported as some airlines have moved to take schedules out for the next few weeks; most noticeably Southwest with an 11% cut in weekly capacity. However, strong capacity growth in Asia and Lower South America cover the loss of capacity elsewhere leaving us with 22% fewer seats than in January 2020. With demand still lower than in “normal” times it is very likely that the total market remains around 40% below 2020 levels and heading into 2022 airlines will be praying for the return of the corporate traveller; sadly they may have to pray for a long time given other factors at play at the moment.

Various stories in the last week have suggested that the Indian economy will grow faster than China in 2022, and the most recent capacity growth of 11% week-on-week would support that story. Capacity in India is now at nearly 90% of pre-Covid levels with some 400,000 seats added week-on-week; Indian capacity will never reach the volumes operated in either China or the United States but now occupies a comfortable third position sufficiently distanced from fourth-place Japan.

Amongst the top twenty country markets, Mexico (+6%) and Colombia (+4%) are both operating with more capacity than their pre-Covid levels. It is probably no coincidence that both markets enjoy large and competitive domestic markets and remained widely open throughout the early stages of the pandemic. Similarly, Brazil with capacity growth of 8% and Indonesia (+14%) report large week-on-week growth with domestic capacity growing back strongly.

As always, for every growth market, there appears to be a market where capacity falls and this week its France on a slippery slope of capacity cuts (-15% week-on-week) just as the ski season is about to start. Restricting international travel may sound sensible, but since Omicron carries no passport and moves freely across countries it seems that such capacity cuts based around travel restrictions are closing a stable door after the horse has bolted.

Filed airline capacity data would suggest that both American Air Lines and Delta Air Lines were planning to carry more people home this week at the end of the holiday period; other factors may have conspired against them in operating all those seats, but the intention was clearly positive. Meanwhile both United and Southwest have cut capacity week-on-week and as we noted earlier airlines handle operational disruption in different ways. Similarly, Ryanair have been very public in announcing plans to cut their capacity by over one-third in January, this week the airline intends to operate 2.8 million seats across the groups various carriers; next week that collapses to 1.3 million and if Ryanair are taking such steps then we should expect others to follow!

Slightly more quietly easyJet have already started to cut capacity with a 26% cut in seats operated week-on-week, and by mid-January the airline will be operating around 583,000 weekly seats. In the 6th December data, easyJet had intended to operate 841,000 seats so a 30% further reduction in capacity in the last month. Who on earth would want to run an airline!

For airlines the next few weeks will be difficult both from an operational perspective but also in the context of shaping the whole of 2022, CEO’s and management teams will certainly be earning their salaries in the next few weeks. For those carriers that are struggling with resources, balancing continued operations against “burning” too many hours on staff available for work, it is a careful balancing act and since some airlines had their fingers burnt last year caution may be exercised by many.

At the same time for airlines that are brave enough to look beyond Omicron the second quarter of the year probably looks quite positive, strong pent-up demand has already resulted in carriers adding back aircraft such as the A380 and reopening long haul routes in many markets suggest things are getting better. And in truth they probably are, but could anything be worse than what we faced this time last year; things are getting better but as we have always said there will be bumps in the road to recovery; some steeper and deeper than others. Repeating what we said last year may seem a bit hollow, but we do just need to get past the first quarter of 2022, as indeed getting through the first quarter has always been the crucial period in this industry.

Stay safe everyone and dream of the 1st April!