Does the Tokyo Olympics Need Aviation to be Back?

Will they? Won’t they? The Tokyo Olympics didn’t happen in 2020 and now the question is will they happen in 2021. Obviously, the primary concern for the organisers is the risk of spreading covid-19, but to what extent does the event also rely on the world of global aviation being at least partially recovered. It is, after all, a major international event played out on the world stage. It would be easy to think that this means that a successful Games also depends on vast numbers of visitors coming from all over the world. But is that the case? Typically, around 14,000 athletes participate in each Olympics and they have a support team around them. But these aren’t huge numbers when it comes to aviation. An airport such as Tokyo Haneda averaged 7 million passengers each month through 2019. Do the Olympics generate large numbers of additional foreign visitors for the host nation? The answer is both ‘yes’ and ‘no’.

Air passenger data to and from London for July and August 2012 shows that there was a rise in traffic of 1.4% compared to July and August 2011. However, this was made up of an increase of 2.4%, or 260,000, in UK originating passengers and a 0.2% rise in foreign travellers. In other words, Brits went away in slightly greater numbers than usual, while foreign visitor numbers hardly changed.

When we look at this by country of origin, it’s clear that there are different patterns of behaviour by country of origin. Spain, the largest market to and from London, showed a distinct dip in July and August 2012. Was this Brits living in Spain who chose not to return to the UK while the Games were on, put off by higher air ticket prices? German visitors increased but there were fewer Americans than the year before. Stories of high air fares and expensive hotel prices in the City abounded at the time. It’s certainly not clear from this data how much air travel was a consequence primarily from the Games, although Visit Britain reported that 470,000 visits, or 5% of all visits, were mainly for the purpose of participating in, watching or working at the London Olympic or Paralympic Games in that year. 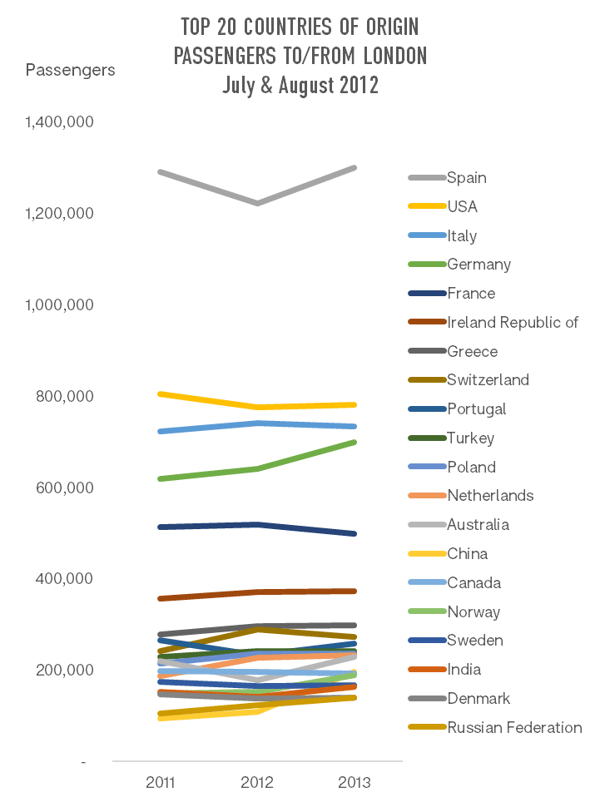 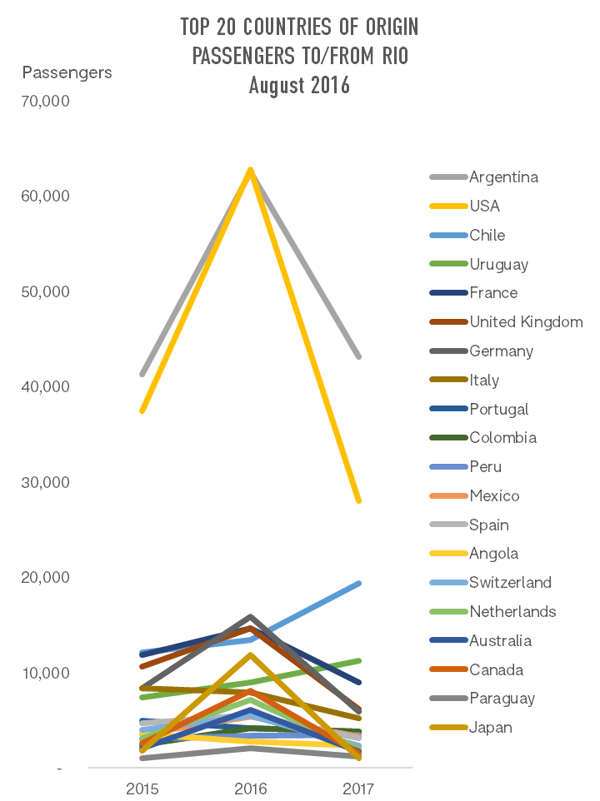 So how important is it that global aviation be back up and running for the Summer Olympics to be a success? Probably not so very important. Obviously, competitors and their support staff need to be able to travel to and from Japan, but these are relatively small numbers when it comes to aviation. In usual times around 80% of passengers using Tokyo airports have a Japanese point of origin and while the volume was down by 60% in August 2020, there were still almost twice the number of people using the airport who had a Japanese point of origin as had a foreign point of origin in the previous August. There are plenty of people still flying within Japan to make sure that stadiums are full, should that be possible and permitted. The state of emergency declared last week in the Greater Tokyo area after a record number of new cases may be alarming but overall Japan has had a good track record of handling the pandemic, and compared to many countries, cases have been relatively low in number.

Even if the vast majority of us end up watching the Tokyo Olympics from the safety of our homes this summer, they can still be a huge success for Japan. The London Olympic organisers talked a lot about legacy by which they meant what comes after. In the July and August of the year after the London Olympics air passenger volumes to the city rose by 3.6% overall, and passengers with a foreign point of origin rose by 5.2%. Japan has ambitious international arrival targets, which the pandemic will have made very much harder to meet, but if the Japanese authorities are able to paint a picture around the Olympics and streamed direct to our living rooms and smart phones, they’ll have us all wanting to visit Japan in the years ahead.