Queen of the Skies: End of an era for British Airways and 747

Iconic, much loved, instantly recognised, the B747 is probably the most photographed commercial aircraft of all time it's also probably the oldest aircraft model still flying which says a lot for its everlasting appeal. British Airways decision to retire the aircraft two-years earlier than originally planned represents a pragmatic assessment of the aircrafts value in a new normal world of aviation. Its a shame but inevitable.

A Steady Descent in Users

Like losing a friend, we have all known that the 747 was reaching the end of its life expectancy; the sharp shock of Covid-19 has just brought that closer to all of us and now those opportunities for an upper deck seat in the bubble are becoming increasingly rare. As the chart below shows the 747 has been retired by many airlines in recent years as the combination of next generation aircraft, right sizing aircraft to market demand and of course four engines all impacted demand. This year seventeen airlines planned to operate the aircraft and it’s likely that at least three or four will have stopped such services as a result of Covid-19. 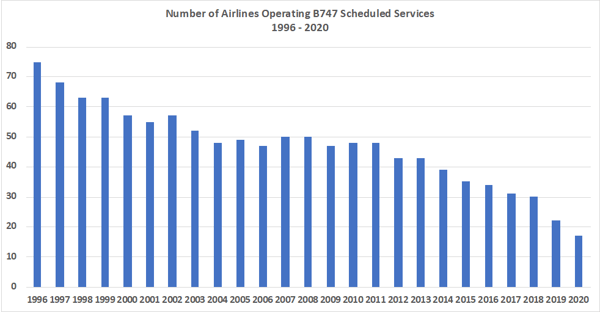 For many airlines the 747 offered tremendous flexibility. At one end of the spectrum Japan Airlines operated the aircraft in a 533-seat configuration on domestic services and then at the other end of the spectrum British Airways using essentially the same aircraft in a 275 seats configuration of which 100 are premium seats in Business and First Class. Such flexibility of operation and of course the Combi version was a real asset that other aircraft may just not offer in the future. The 747 really was an airlines flexible friend.

Tracking the usage of the B747 across the BA network over the last twenty-five years highlights just how in different configurations the aircraft has operated around the world. Prior to retirement the aircraft was predominantly being operated on Transatlantic sectors with over 75% of flights destined for the United States and the vast majority of all other services destined for Africa with Cape Town, Lagos and Accra featuring heavily. However, in its operational history for BA the B747 has operated such diverse sectors as Jakarta – Kuala Lumpur (until 1999), Islamabad – Manchester (until 2000) and from Lilongwe – Lusaka until 1998; it has literally been everywhere for BA as the map below highlights. 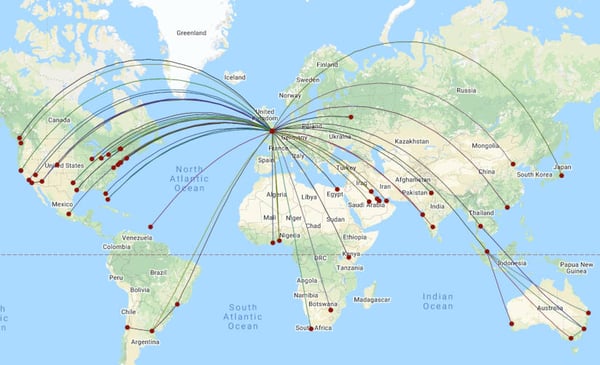 For those interested in the quirky facts; the B747 accounted for around 12.6% of British Airways scheduled aircraft utilisation in 2019 and during its career with the airline operated over half a million scheduled services (532,767) and spent some 354,000 days in the air; the equivalent of some 944 years flying which is a lot if inflight movie watching!

But it also of course begs the question of how will BA feel the network gap?

Right Sizing for The New World

The impact of Covid-19 has been deeper and will probably be longer than the initial optimistic expectations. Sentiment is now leaning towards 2023 before the industry recovers back to 2019 levels; a four-year recovery period is longer than any other “global event” impact on the industry. For British Airways and indeed Virgin Atlantic and Qantas the B747 would have been retired from operation by that point anyway.

For British Airways Covid-19 has presented an opportunity. Lower global demand in the short to medium term provides an opportunity for both phasing out the B747 and in all likelihood the A380 and then use planned new generation long-haul aircraft to support the future planned network build out. Currently BA are scheduled to take delivery of 12 A350’s by the end of 2021 and 10 B787’s by 2023.

Interestingly from a premium demand perspective the retirement also takes away the very large 86 business class cabin on some of their aircraft for a much smaller 56 seat cabin on the A350 and a 48-seat cabin on the B787. With corporate demand likely to be one of the last segments to recover and particularly long-haul, for BA a message around downsizing the premium cabin and squeezing yields even higher with a lower operating cost will resonate with shareholders. And ultimately that is what British Airways are expected to deliver.

Fortunately, some airlines will continue to operate the aircraft for a few more years, just finding those services is becoming harder every day. Looking forward to October and of course accepting that anything can happen in today’s fast changing world some sixteen airlines still intend to operate the B747. Both Lufthansa and Korean Air will be operating their B747-800 fleets, Thai Airways some of their ten B747’s and Mahan Air perhaps their B747-300 aircraft which has just passed 34 years of operation.

One less B747 operator may just seem like a “so what” moment but for many the accelerated retirement of the aircraft by British Airways seems like the end of an era; and indeed, it maybe. However, if it is the end of that era then if it leads to a more realistic fit of capacity to demand for the airlines and allows for a recovery of cash reserves and profitability then surely that has to be a good thing for us all.