The flattest seasonal holiday season has been reflected in the latest global capacity which has broadly remained around sixty million seats a week since the middle of December. The early Christmas present of breaking that sixty million, was just that, a present and this week’s 59.6 million is perhaps likely to be as good as we can expect in the next few weeks.

The first month of every year is always one of the slowest for demand with no real leisure activity aside from a slippery slope or two in Europe and no major public holidays to celebrate before Chinese New Year. No surprise then that for the first time in a long while, forward capacity for next week and beyond is actually below this week’s level and that is before network planners’ factor in the next planned series of lockdowns. Oh, happy days!

Scheduled airlines around the globe are currently offering a range of eye-watering fares in the hope of jabbing the market back into recovery mode although sentiment seems to be towards no real recovery before the second half of the year in demand. The whole industry appears to be holding its breath for good news and the reopening of borders and international travel. 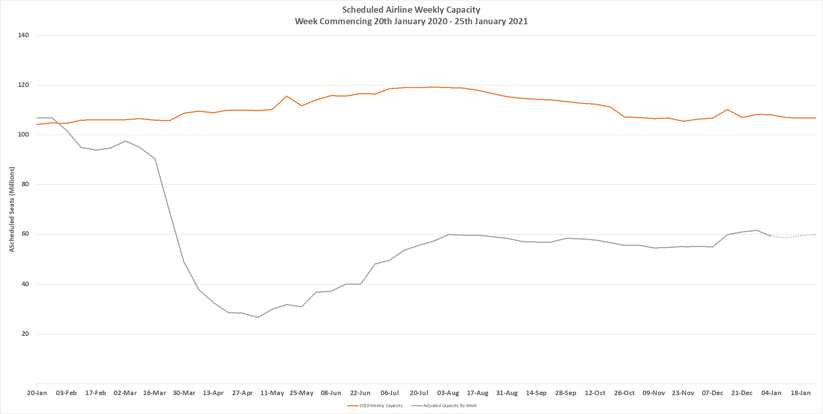 Four of the five largest regional markets are reporting capacity reductions week on week. North America where with nearly 10% of all capacity has been shaved off and 1.4 million seats dropped compared to last week. North East Asia reflects a similar pattern with a million fewer seats operating although the region remains at close to 75% of the capacity operated in the same week last year.

The fastest growing region week on week is Lower South America where capacity has increased by some 12% with another 266,000 seats placed back into the market. We have noted before that Latin America generally has been around six weeks behind the Covid-19 curve’s impact in other markets and this growth may shrink away in the next few weeks with some countries reintroducing quarantine requirements on arrival last week.

Eastern Europe is also apparently growing again, with regional week on week growth of 7% and some 141,000 more scheduled seats. I say apparently because much of that growth is from Romania with Wizzair, Blue Air and Tarom all increasing services; quite how many of those will be cancelled at less than seven days’ notice will be interesting to watch.

For the Caribbean region the next few months are usually the peak demand period as a combination of snowbirds migrate from North America and Europe to find some sun. The early indicators for the season are not great; capacity this week is down by 9% compared to last week and 40% down on this time last year. Impressively the US Virgin Islands are currently showing some 10% capacity growth for the first quarter of this year against 2020 whilst at the other end of the spectrum Cuba stands at some 63% below last years scheduled capacity for the first three months of 2021.

China was the largest aviation market in the world in 2020 and continues to hold it’s position as we head in to 2021 with little risk of any change before international lockdowns are eased to and from the United States. The remarkable transition from an international to domestic focus in Chinese capacity cannot be ignored; in January 2020 there were typically some 2.1 million international seats; this week just 153,000. At the same time domestic capacity has remained around the 14.7 million seats a week. Until that international capacity returns many surrounding country markets remain frustrated in their attempts to recover; China literally holds the key for many surrounding markets.

Both France and the United Kingdom are impacted this week by increased travel restrictions with an expectation of more capacity to be cut in the next few weeks. Looking forward, which is never wise as a Brighton supporter, both markets already have a further 100,000 fewer seats planned for next week and that may fall back further.

The three largest airlines in the world at the start of 2021 are all US based with Delta still in pole position with American closely behind; in fact, American were in first place last week but we just didn’t report anything (sorry guys!), maybe next time.

There is an expectation that when the recovery comes it will be based upon massive market stimulation from the low-cost airline segment, indeed many European carriers are already actively building demand for the second half of the year. However, only two low-cost carriers currently appear in the top ten ranking of airlines; at the beginning of 2020 Ryanair ranked 7th in this table with some 2.4 million seats a week; they now rank 12th with some 800,000 seats a week.

The first week of 2021 was never going to be significantly better than the last week of December, but the indications are that we are once again becalmed around the sixty million mark waiting for some vaccine breakthrough moment. For airlines and airports, it’s a bi-polar moment; fearful of what the next three months will bring but equally optimistic about the second half of the year. Now if we could just close our eyes for perhaps two months then things may start to look a lot better; but getting there will be a challenge for many; just as well this industry loves a challenge!