Last week we reported on probably the most dramatic reduction in capacity we had ever seen in one market; one week later we have to report that the Coronavirus has resulted in two-thirds of international capacity to and from China being cancelled.

In less than four weeks the number of weekly international seats operated from China has fallen by some 1.4 million seats since the week commencing the 20th January as the table below highlights. In comparative terms that reduction in capacity is more than all of the scheduled international capacity planned from France this week. 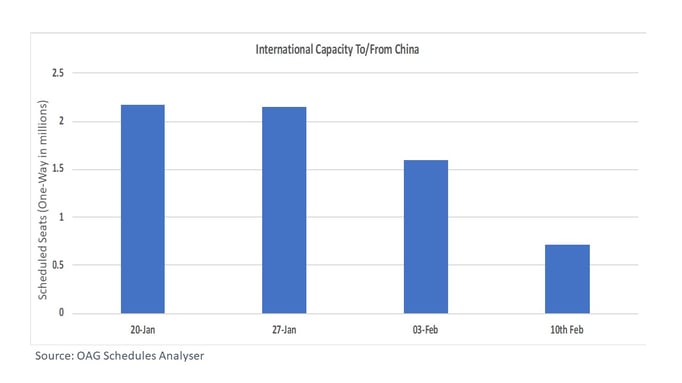 Japan’s Olympic Hopes Damaged - With the Summer 2020 Olympics only 165 days away Japan was already facing some real challenges in reaching their stated ambition of 40 million visitors by 2021. No single market has been impacted by Coronavirus as much as Japan where scheduled airline capacity has fallen by some 200,000 per week compared to the week of the 20th January; a 60% fall in capacity in four weeks. Week on week comparison shows some 118,000 scheduled seats dropped from China to Japan. 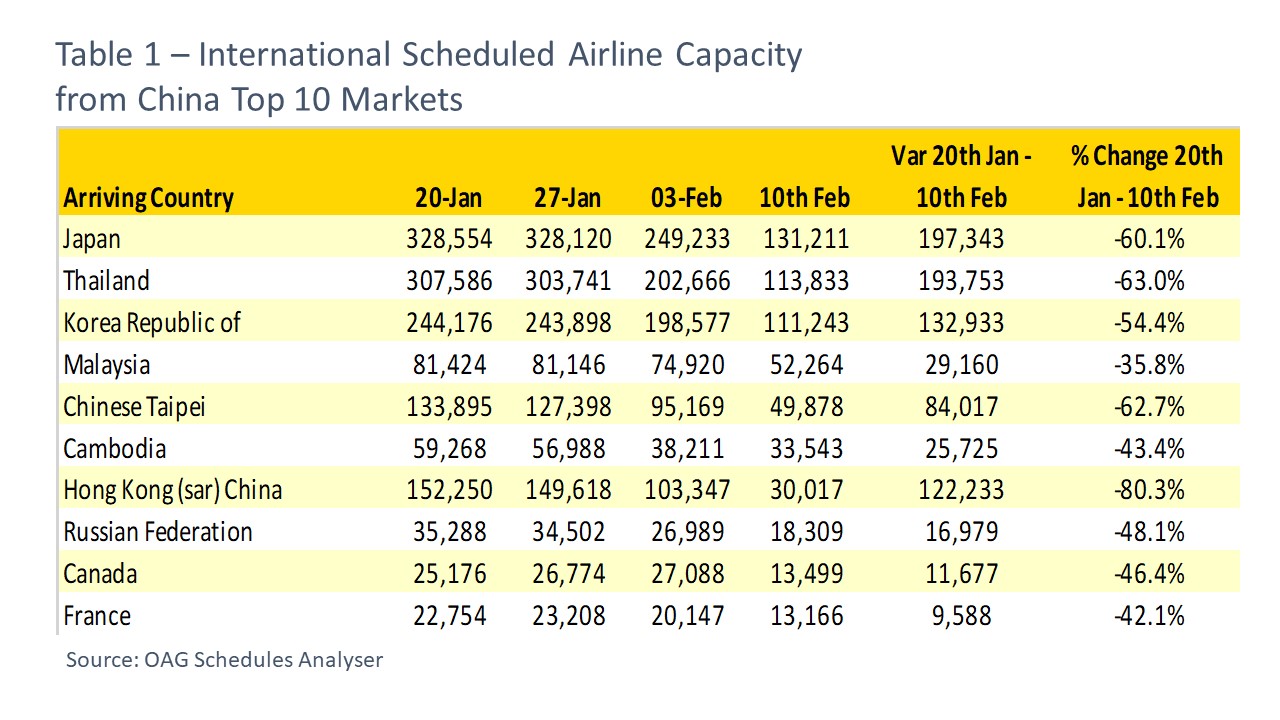 Thailand which relies heavily on visitors from China has also been badly hit with similarly nearly 200,000 fewer seats to China than four weeks ago. It should also of course be noted that passenger load factors on those services that are operating are likely to be lower than average so traffic volumes will be further depressed.

In absolute terms, major country markets such as Indonesia (-92%), Singapore (-89%), Hong Kong (sar) China (80%) and the United States (-86%) have all seen dramatic reductions in capacity over the four-week period. The banning of flights by some countries is also reflected in no capacity to Italy whilst direct air links to other markets such as Hungary, Oman and the Maldives highlight the extent of the impact.

Chinese Majors Implement Major Cuts – China’s three largest airlines have now cut international capacity by over half a million seats a week compared to four weeks ago. As a consequence, Spring Airlines who appear to have only reduced capacity by 6% through the crisis are now China’s largest international airline! Although great for a marketing campaign the timing is perhaps not quite right for such messaging.

Naturally the impact of Coronavirus “ripples” out from China. Cathay Dragon for instance have cut capacity by some 63,000 seats from China compared to the week of the 20th January. Other carriers such as Korean Air, Asiana Airlines and All Nippon Airways have seen capacity nearly halved as they attempt to balance the need to maintain operations with dramatic reductions in demand.

It Can’t Get Worse….Can It? – we hope not! However, there are still some 718,000 scheduled seats planned to operate this week from China, which is similar to the planned outbound capacity from the whole of Greece this week. Our expectation is that international capacity from China may again fall over the next few days but that we have seen the worst of the cuts with airlines having responded quickly to the virus.

Ultimately we know from previous events of this nature that capacity and demand will return quickly but the numbers are certainly some of the most dramatic we have ever seen in any market.