Last week saw an increase in scheduled airline capacity as China added back some three million seats to their domestic network offering some early signs of recovery in the first market affected. Last Monday also saw a number of airlines in Europe and North America begin a series of adjustments in response to the increasing local outbreaks of the virus. The chart below illustrates this point very well with the injection of those three million seats last week before the most recent reduction. In absolute terms capacity has fallen by some 11% and in the last week by 2.7%.

Looking at the five largest regional markets there are some noticeable movements week on week with both North East Asia and Western Europe seeing weekly capacity fall by more than one million seats a week as airlines continue to adjust schedules.

This week China will see some 8.6 million scheduled seats operated of which 8.3 million (97%) are domestic seats; current weekly capacity is running at just over half (52%) compared to the week of the 20th January and International capacity at just 14% of the levels reported eight weeks ago.

With Chinese capacity well reported we have taken a look at the market Excluding all Chinese airlines to determine the impact on capacity across these carriers. In the last week, Asiana Airlines, Korean Air, Japan Air Lines and Peach Aviation have all made significant reductions in capacity with Korean Air in particular (-62%) having dramatically adjusted their production. Cathay Pacific, for many a flagship regional carrier has now moved from the 45th largest airline in the world eight weeks ago to 116th with some 440,000 fewer seats being operated this week.

Total capacity in Western Europe is down by some 5% over the previous week as airlines continue to adjust their schedules in line with travel restrictions and reported cases of the virus. The capacity picture is extremely fluid at the moment with almost hourly changes being made and with some airlines adopting different ways to handle cancellations and reschedules that make detailed analysis challenging on some occasions!

The largest week on week decline in capacity amongst the major markets has been in Italy where capacity has fallen by some 13% followed by Germany with a 11% reduction; the United Kingdom has also seen a 5% reduction in capacity although the collapse of FlyBe accounts for most of that reduction.

With the seasonal Easter holiday period getting ever closer we have looked in a bit more detail at one airline, Lufthansa and their planned capacity over the coming weeks since the airline was one of the first to announce a programme of capacity and service reductions. Looking forward to the 20th April you can see the clear reduction in capacity planned from this week when some 400,000 fewer seats (28%) will be operated than planned on the 20th January with the airline currently planning to add capacity back from the week commencing the 30th March but even then not to the original levels of service. In total Lufthansa are looking at operating some 2.4 million seats fewer seats to the end of April than originally planned; with OAG Traffic Analyser reporting an average yield of US$251 per passenger for the airline in 2019 that suggests a US$ 490 million revenue loss for the airline. 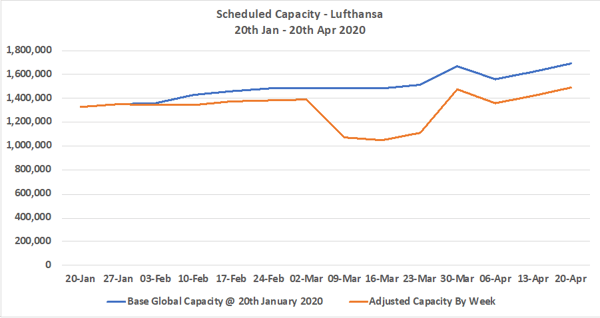 Despite announcements of capacity cuts by some of the major airlines the current data suggests that the market at least from a capacity perspective continues to grow week on week although airlines may of course still be adjusting capacity each day. Planned capacity for the week of the 20th April remains within 2% of the planned capacity filed on the 20th January. 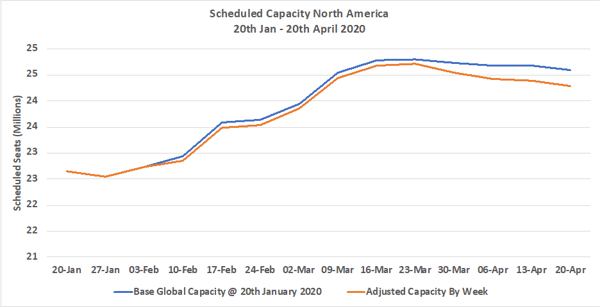 Looking specifically at scheduled airlines domiciled in the United States it would appear that many carriers have both added capacity in the last week and in comparison, to what was planned for the week of the 20th January. In particular Allegiant Air have added nearly 200,000 additional seats in the last eight weeks as they ramp up for the Summer season.

Summarising the current situation is difficult. Capacity is changing in proportion to the spread of Coronavirus and optimistically the increases in Chinese domestic capacity are running alongside reductions in the number of new reported cases. However, in other major North East Asian markets however to decline week on week as new Coronavirus cases are reported. Western Europe is beginning to see capacity cuts whilst North America capacity remains broadly stable. Let’s see what next week brings!