The slow, but now steady, reduction in capacity continued this week with just under a quarter of a million seats fewer planned for the next seven days, as we once again dip back to 78.8 million seats. Current capacity stands at around 70% of 2019 levels, but with almost all markets reporting load factors some 10% to 15% below normal levels, that would suggest demand is still perhaps 30% to 40% below normal levels. Worryingly, there have been few sightings of the lesser spotted business traveller as the autumn approaches, and for many airlines that is worrying; if they are not spotted soon, then February 2022 looks the most likely chance of any reappearance.

Current market sentiment may explain why a further 20.6 million seats were removed by airlines from their selling systems to the end of December; an additional 3 million over the previous week when just 17 million were removed. In the second week of December 2019, global capacity was some 6.5% below the week we are now in; a similar reduction would see capacity in mid-December this year at 73.6 million; that might be optimistic. After all, airlines currently have little need to add more capacity, load factors suggest there is enough capacity for everyone in most markets. 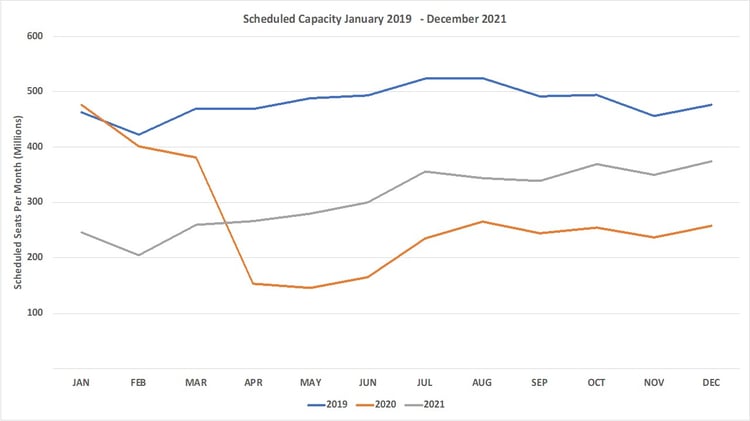 Looking on the bright side of life, there are some regional markets where capacity has seen business air travel increase quite strongly in the last week. South East Asia has nearly 200,000 additional seats added back and finally there is some domestic capacity being added in Malaysia, where Phuket has once again opened for tourism, we can only hope the trial is a success. Southern Africa reports a 5.5% increase, which amounts to some 21,000 more seats, although the total market remains at only half of the 2019 level. Similarly, Southwest Pacific saw 35,000 seats added back but remains, along with South East Asia, at less than 30% of the normal capacity levels; these two markets are so interconnected that until one moves both will remain in a similar position.

Unfortunately, those positive growth rates in corporate travel are drowned out by just a 2.5% reduction in capacity in North East Asia. This time last week the region had become very close to taking over as the largest regional market, but a drop of nearly half a million seats has set that ambition back by a few weeks. China of course holds the key, but with a reluctance to increase international capacity, the regional claim to fame may be lost for a while yet. 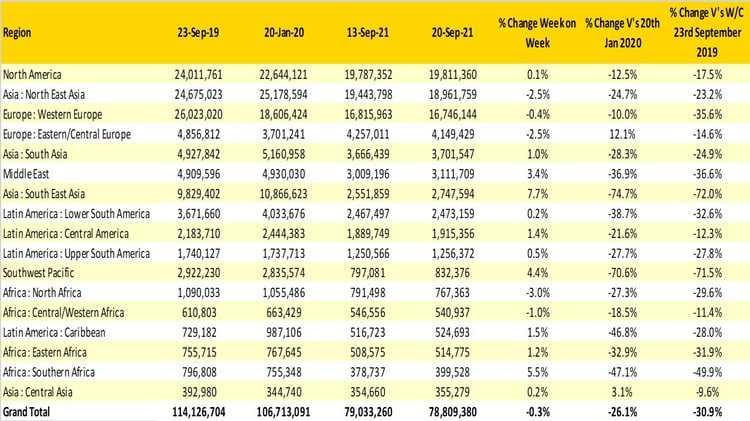 The United States continues to be the largest country market by some distance with a 3.6 million weekly seat gap to China, which reported a 4% drop in capacity this week. It is interesting to compare the number of international seats currently on offer from the world’s two largest markets, the United States has some 1.7 million seats on sale (2.8 million in 2019), primarily to the Caribbean and Latin America, whilst China has 128,000 compared to just over 2 million in 2019.

The resumption of diplomatic relations between Saudi Arabia and the UAE last week has resulted in both country markets seeing an increase in weekly capacity. Saudi Arabia has embarked on some massive infrastructure projects, many of which have support from the UAE, and the capacity is much needed. For the UAE, the continued lockdowns and travel restrictions to South East Asia remain a frustration in their capacity rebuild and explain why the business air travel market is still only at half of its normal capacity levels.

It  may have gone unnoticed that the UK changed its travel requirements last week, too late for any airline to make capacity changes for this week’s data. Our suspicion is that airlines will not be adding any significant amounts of new capacity, but instead hoping to fill a few more rows on existing services and even perhaps revenue managing a flight or two over the half-term holiday period. 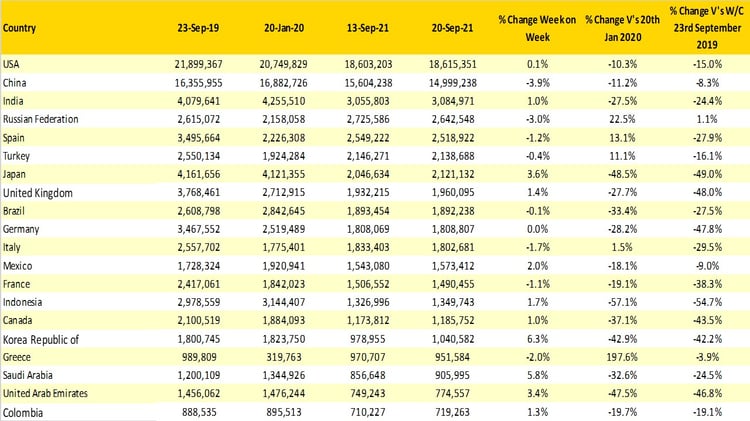 Aside from the major Chinese airlines all adjusting capacity down this week, there is little movement in the data to report, and perhaps the most telling story is for those airlines that remain stranded. Carriers such as Cathay Pacific, Singapore Airlines and Malaysia Airlines continue to operate with very low levels of weekly capacity, despite attempts to introduce travel corridors and vaccinated travel lanes. Looking forward for those airlines, the outlook remains gloomy. 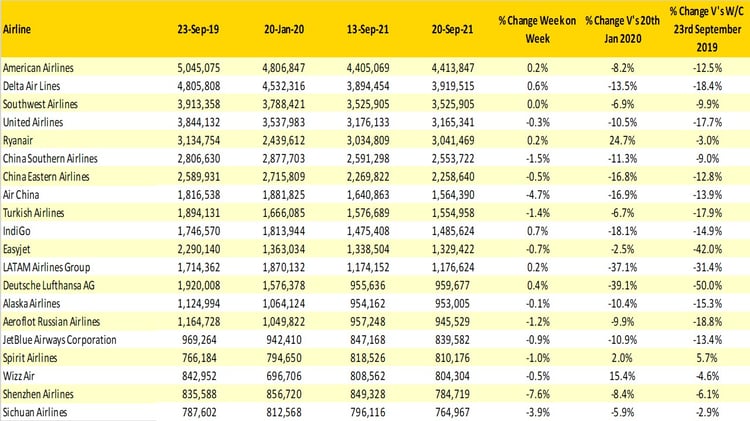 Last Monday, the expected capacity for this week stood at 81.9 million. Seven days later and it had slipped back to 78.8 million: a fall of nearly 4% in the week before travel. Peeking into next week, current capacity stands at 81.2 million so a similar week-on-week drop will see capacity continue its steady decline as the last month of the summer season ends.

If you missed last week's webinar this is now available to watch on-demand here including presentation slides to download.