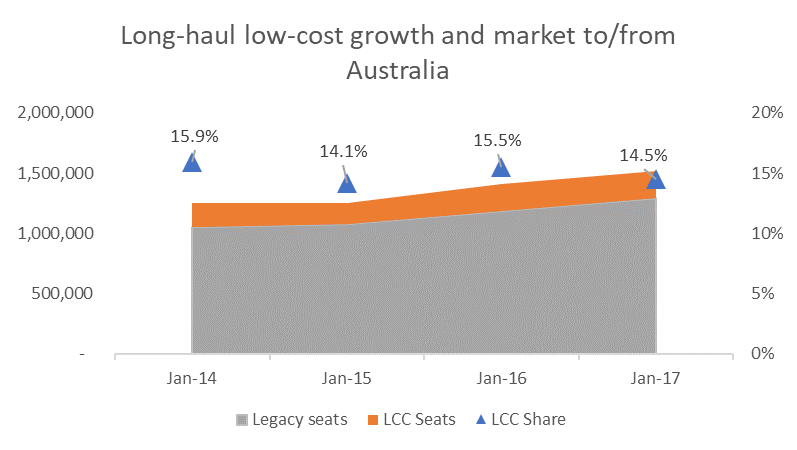 While legacy airline competitors are keeping an eye on how Norwegian Airlines fares with its long-haul low-cost flights on the Atlantic, long-haul low-cost options have been a regular feature of Australian international air services for some years. Are there lessons to be learned, and can we use the experience with Australia to predict the likely low-cost market share in long-haul markets?

Through this period, two low-cost carriers have dominated the market, Australia-based Jetstar Airways with 47% of long-haul low-cost capacity, and Kuala Lumpur-based AirAsia X with 39%. Scoot operates a further 11% of capacity and Cebu Pacific the final 4%. While Jetstar has gradually added to its capacity, the other carriers have seen capacity grow and shrink in different years.

How does this compare to the evolution of low-cost airline capacity share more generally?

On transatlantic routes, where long-haul low-cost airlines are a more recent phenomena, low-cost capacity only makes up 5% of capacity.

Is the lesson from the established long-haul low-cost Australian market that expectations should be set at a maximum share of around 15% of the market for low-cost capacity? Maybe. Maybe not. Norwegian’s competitors on the North Atlantic will be watching and waiting.