The eighth consecutive week of capacity growth takes us to 63.2 million seats a week, the highest point for over a year and further hope of a slow but steady recovery in capacity in many markets around the world. As we have seen throughout the last year no two markets are at the same stage in their Covid-19 event and for all the positivity in this week’s numbers a few markets continue to show reductions in capacity. All of which highlights the “stop, start” nature of the market; perhaps some traffic lights might help in the recovery!

Despite the modest week on week capacity growth of 1.1 million seats (+1.8%) airlines appear to remain cautious around capacity with some 18.5 million seats removed from the systems over the last week for the second quarter of the year. However, that caution turns into confidence by August with an additional 14 million seats added back suggesting a holiday stampede of demand and perhaps full flights returning: oh, happy days! 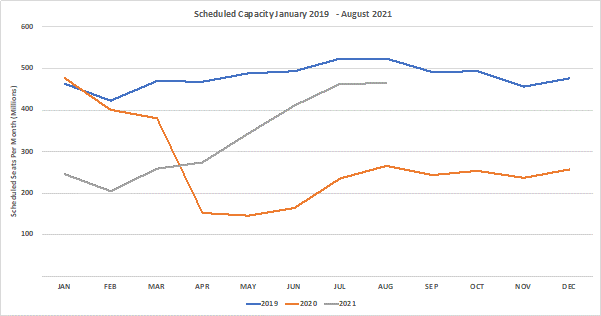 Highlighting the positives of eight weeks of growth does however need to be placed in a broader context. Global capacity remains at 40% below pre-Covid levels and two major markets, Western Europe (-69%) and Lower South America (-66%) are struggling to catch up with all other regions. North East Asia continues to be the largest regional market, no great surprise given that China, South Korea and Japan are counted in that region and is now very close to 80% of the regions normal capacity levels and would be much closer if any significant international capacity was flowing between the three countries.

Capacity across Africa remains at just over half of the base level at 1.6 million seats a week with a very even distribution of capacity across the four regions. In comparison to pre-Covid, North Africa remains the largest loser with some 620,000 fewer seats a week currently on offer with major carriers such as Royal Air Maroc (-30%) and Air Algerie (-36%) struggling to recover and only some 70 airlines operating scheduled services this week compared to 105 in January 2020. At the other end of the continent, Southern Africa currently has some 38 airlines operating scheduled services compared to 55 BC (before Covid), South African Airways did account for some 20% of that capacity and with no sign of a return to operation the outlook for a full recovery in this region remains unlikely.

Latin America continues to be a continent of two very different halves with Upper South America continuing to grow back strongly in recent weeks whilst the Lower region has seen some 27% of capacity withdrawn since the 8th March as Brazil struggles with another wave of the pandemic.

There is no change in the positions of the top ten country markets and only limited movement below that level. China remains the largest country market and is just 3% below their pre-Covid levels of capacity although the fact that almost all of that capacity is domestic will not be missed on those local carriers who used to operate lucrative international sectors. It will be interesting once everything returns to normal to see how much of the current domestic capacity “sticks” and how much “flips” to those higher yielding services.

In the USA, despite the recent market bounce back and the introduction of numerous new non-stop services bypassing hub airports total capacity remains at 25% below January 2020 levels. Domestic capacity remains at some 4 million seats a week below normal levels while international capacity is at half of that normally operated. This week in 2019 there were some 394,000 seats a week from the USA to Canada, this week, assuming Delta Air Lines have enough pilots, there will be 18,000 whilst to the UK there was 272,000 seats and this week 42,000. The reopening of those two markets alone would make a considerable difference in the recovery process.

The fastest week on week growth amongst the top twenty country markets was in Thailand where 96,000 additional seats were added in the week; domestic capacity is currently running at 91% of normal levels but international capacity is at less than 8% of pre-Covid levels and for a country where tourism is such an important part of the economy that remains a serious concern.

Looking forward the top twenty country markets are unlikely to change before the middle of May at the earliest. Comfortably settled in 21st position in the UK with around 360,000 seats a week and a long way behind Italy at 582,000. With legal international travel very unlikely in the next six weeks we will probably find a different top twenty for next week or risk reader boredom!

Three quarters of the world’s top twenty airlines are based in either the United States or China; three US based carriers take the top positions followed by China’s two largest domestic airlines. American Airlines continue to distance themselves from second placed Delta Air Lines and are now comfortably the world’s largest airline as judged on number of seats operated and not some other more tenuous measurement.

Perhaps the most telling rank is that of LATAM who despite operating just over one-third of their pre-Covid capacity still manage to rank in the top twenty carriers; it really is quite an achievement to see capacity fall so much and still appear in the list; or perhaps more a reflection of how much more deeply some carriers remain impacted.

In Hong Kong, both HK Express and Hong Kong Airlines are scheduled to operate less than 1% of their “normal” capacity this week; Thai International less than 7%, Malaysia Airlines just over 10% of their regular capacity (pre their latest reorganisation of course) and WestJet in Canada just 11% of their normal capacity. For many airlines there remains a very long journey towards a recovery and however much pent-up demand exist, every day without flying is costing millions for the airlines concerned.

In late December everyone hoped that the second quarter of the year would be the turning point in terms of a recovery in demand, in early January for most markets that hope disappeared. The second quarter of 2021 looks like it may well be at least, for the next six weeks, pretty flat with many countries still impacted by travel lockdowns and quarantine requirements, airlines seem to be increasingly hoping for a very strong late summer surge through August and perhaps September. For that hope to be realised there is a need for rapid clarity around when travel restrictions will be lifted and maybe, just maybe, discussions around traffic lights and corridors may be a solution in the short-term. Unless of course you are colour blind!