Despite the best attempts of the latest Covid-19 variant 'Omicron', and a series of unilateral knee-jerk reactions from Governments around the world, global capacity this week remains stable. Rates are steady at 78.3 million, half of one percentage point down and the whole airline industry continues to watch events very closely, marvelling at the next crazy restriction that encourages travellers to find cunning ways to avoid taking a test. So far, fingers crossed at least, the airlines have not panicked.

There will inevitably be more restrictions on travel imposed in the next seven days, leading to people scrambling to get home earlier than anticipated, or sourcing lateral flow suppliers as part of their holidays. Such restrictions are at least now, intended to be short-term whilst authorities work out what is happening; what is happening is that the airline industry is being battered again but will survive.

Finishing the year at around three-quarters of pre-covid levels will represent an improvement on the first half of 2021, and a steady level of shortfall has occurred over the last few months. Any hopes of kicking on in the second quarter of 2022 may now be at risk, but demand remains strong, at least based on the chaos of crowds I personally witnessed at one airport over the weekend. 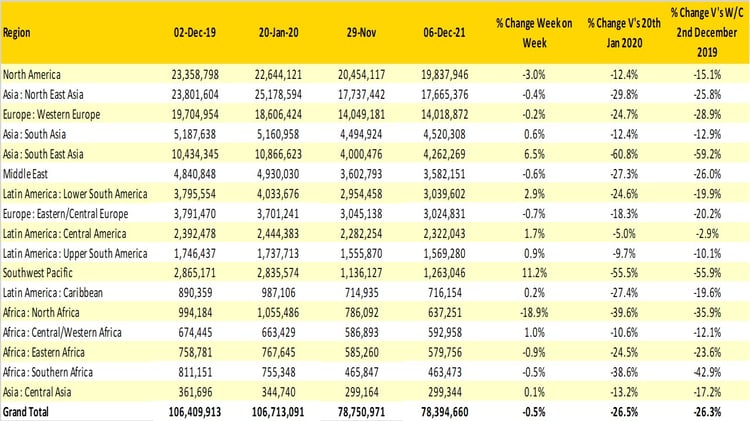 Looking at the regional data this week, there are the usual series of variances that seem to round out over the course of the data. North Africa is down by near one-fifth as restrictions are put in place, whilst the Southwest Pacific is up by 11%, as ironically some travel restrictions are eased. The loss of around 150,000 seats in North Africa is offset by a similar level of growth in the Southwest Pacific, highlighting the many times we see symmetry in the data sets.

North America reports a 3% reduction in total capacity as some of the ultra-low-cost carriers, who are extremely flexible with capacity, edge back their operations for around a two-week period ahead of the year end holidays. Other notable country markets that are down this week are Turkey (-5.3%) and Germany (-2.2%), which has now slipped just below Indonesia in the top twenty listing. Strangely, and almost a statement of defiance, the UK market increased by 2.7%. Some of that capacity may be at risk as airlines review their schedules this week, but it does point to an underlying strength of recovery that will overcome the latest challenges. 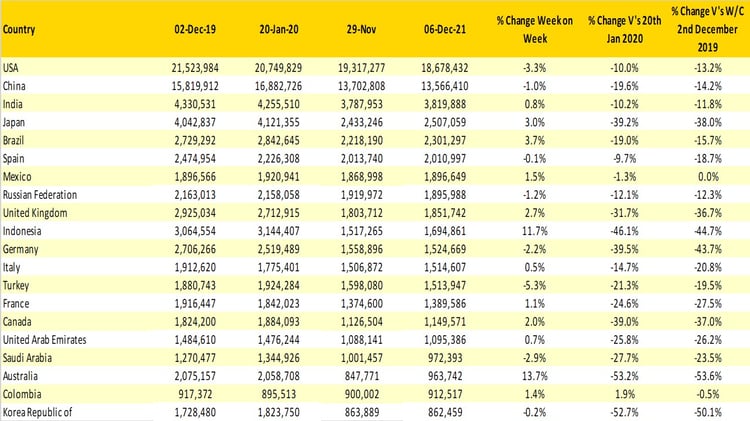 Acting in unison, all the US based carriers in the airline top 20 reported reductions in capacity this week as the country comes to a bit of a slow between the two major holiday periods. Indeed, very few carriers in the top 20 added any capacity week on week and ironically, both in terms of reporting a £1 Billion loss for their last year and previous capacity behaviour, easyJet broke the mould with a 13% increase. Presumably, a £2 Billion loss would not have led to a 26% increase in capacity, but stranger things have happened in the last few years.

Aside from the easyJet changes, no airline in the top 20 has seen capacity move by more than a single digit this week, reflecting some of the stability that we have been seeing in the market more recently. Airlines have worked incredibly hard to get back ahead of the market in terms of capacity planning. Next week may well test that stability, let’s hope not. 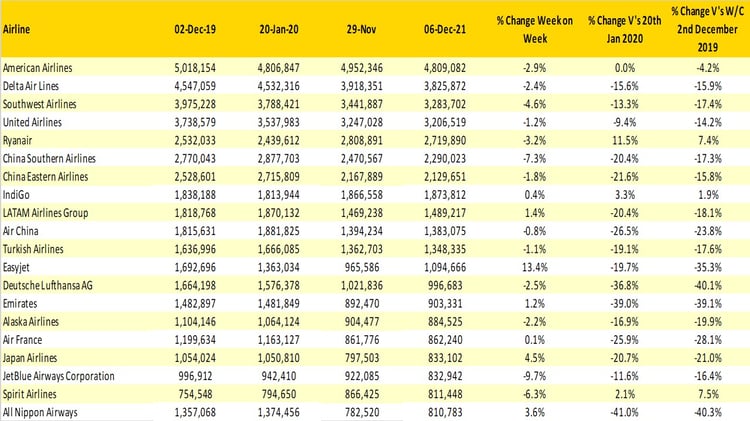 We know that in any covid spike, domestic markets prove more resilient than the international routes that are subject to a greater number of unilateral decisions. The top ten domestic markets now are listed below, with the usual comparisons provided. Four of those domestic markets are either above or within 95% of their historic capacity levels; Russian Federation (2.9%), Mexico (-2.5%), China (-3.2%) and India (-4.2%). Tracking capacity changes in these major markets that have performed well in the pandemic will provide an early indication of how airlines are viewing the current situation. They seem to be holding their nerve at the moment, let’s hope that continues. 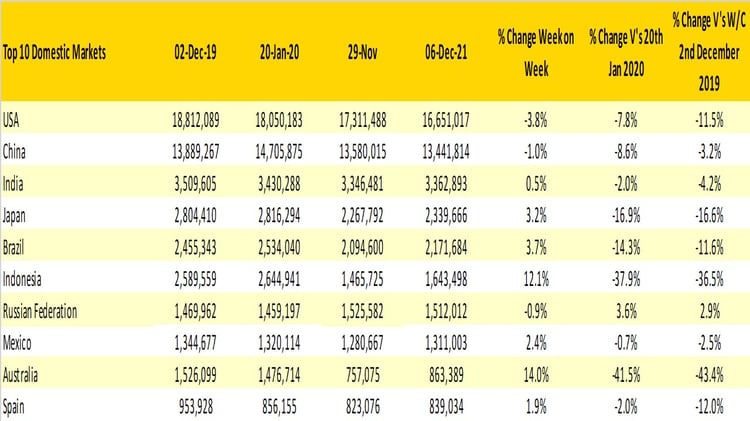 The next seven days for the airline industry could well determine how the first quarter of 2022 looks for every airline, airport, and supplier within the whole travel system. Those that do not panic and avoid making knee-jerk decisions will in time be seen to have supported the aviation sector; others may feel embarrassed at the support provided. For my part, with 48 hours’ notice, I am walking the streets of a large US city looking for a lateral flow testing agent to help get me home in a few days’ time. Hopefully, it will be before Christmas!

All in all, this week’s data feels a bit like holding over Heathrow waiting to land. We know that things are moving forward and there are increasingly positive noises in many markets about re-opening. In many cases those noises remain slightly vague; phrases such as “most likely opening” or “sometime in” are not particularly helpful to airlines trying to plan their recoveries. Most importantly of all though, airlines are making those plans and perhaps we have turned the corner.