Much has been made of the Single African Air Transport Market Agreement (SAATM) signed in January 2018 and the hoped-for increases in air services within Africa, but the Summer 2019 schedules and analysis of the last five years suggests that there is still much work to be done.

In an ironic twist given the new focus on liberalisation, intra-African capacity has fallen this IATA Summer season; Both frequency and capacity have declined compared to Summer 2018. Comparison with Summer 2014, a five-year time period, shows a 14% increase in capacity and a 36% increase in frequency. Accordingly, the average capacity per movement has moved from 105 seats in Summer 2014 to 89 this Summer, highlighting the use of smaller aircraft. Which suggest that the market may be becoming better at matching capacity to market sizes, especially in regional markets.

South Africa dominates the continental landscape with 15.3 million scheduled seats this Summer of which 12.7 million (83%) are operated on domestic sectors. With South Africa’s market three and a half times larger than its closest rival, Kenya, and accounting for some 26% of all intra-African capacity any changes in this market ripple through the whole continent. As such, the expected 2% reduction in capacity this Summer compared to last year may represent an early indication of a slowdown in capacity growth throughout the region. Indeed, year-on-year capacity declines in major country markets such as Nigeria (-24%), Tanzania (-24%) and Algeria (-6.1%) would all suggest that hoped for liberalisation is not yet translating into more capacity. 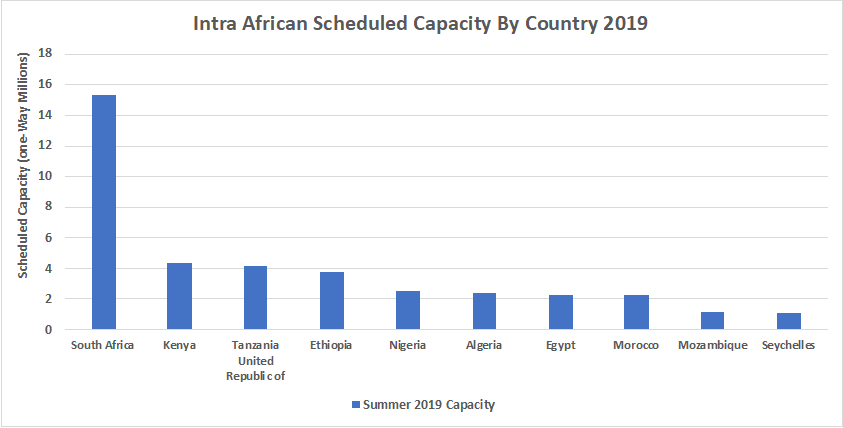 This Summer there are 126 airlines filing scheduled services within Africa, exactly the same number as in Summer 2014 - although there has been considerable churn in that time. The success of Ethiopian Airlines is reflected in their African capacity now reaching over 7.6 million seats for the Summer season, an impressive 90% growth in 5 years as they have complemented their extensive global network growth with regional expansion. Ethiopian Airlines now serve some 153 airport pairs within Africa compared to 103 five years earlier. This shows how one airline has been seizing opportunities and building their network.

Equally, the challenges being faced by South African Airways are highlighted by their 5 million seats this Summer being their lowest level of capacity since 2014, although the airline now serves 95 destinations compared to 81 in 2014 which suggests that reductions in capacity are not at the expense of network expansion.

African airline fragmentation remains similar to a European market place where too many airlines are operating. This creates a real challenge when it comes to building the necessary critical mass to grow and compete with new entrants. Overseas ownership of local carriers remains difficult in many parts of Africa and even today just one-third of all Africa’s major cities are connected by scheduled air service which highlights both the scale of the opportunity and likely levels of liberalisation that will be required to succeed in the long term.

Africa will eventually see the market liberalisation that travellers, airlines and politicians all hope will be realised over the next decade; a lack of alternate transport structures almost makes that inevitable. While high levels of taxation continue on what is still seen as a luxury product rather than an economic catalyst is hindering growth.