During two weeks in March, global capacity was falling at around three million seats a day, in the last two weeks capacity has increased by just over 440,000 seats a day; a recovery may be starting but it has a very long way to go. This week’s numbers show just under half a million seats added back and we are now at 37.2 million compared to 115.8 million in the same week last year; only another 78 million seats to go!

The challenges of building traveller confidence are very real, airlines, airports and other stakeholders are now beginning to explain exactly how flying will be safer than ever. There are some signs of recovery as more booking searches are being made for many destinations and the TSA checkpoint numbers have increased 10% week over week although remain at only 13% of last year’s levels.

Western Europe reported the highest week on week percentage growth (19.4%) whilst North America with just under 850,000 seats had the largest absolute growth. In Western Europe much of that growth is in the Turkish market where Turkish Airlines recommenced international services and both Pegasus and Correndon Airlines added more capacity to their networks. In North America, Southwest Airlines put some more distance between themselves and second placed American Airlines by adding another half a million seats back to their weekly programme. With more than 30,000 seats added back in Denver, Chicago Midway and Washington Baltimore Southwest are clearly seeing sufficient signs of a recovery to continue adding back capacity at their hubs.

The top ten country markets remain similar to previous weeks although there is some movement in the charts with Japan returning to 4th place although there are very high cancellation rates being reported in Japan at the moment suggesting last minute consolidation is taking place. Week twenty-two or twenty-three may see a change as we expect more capacity in Germany leading to Mexico dropping out of top ten.

China is now just below 75% of capacity operated in January and Vietnam very close to 70% of that mark. In Vietnam, domestic capacity is now actually above the January level with over one million seats a week; international capacity at 61,000 seats is however only at 10% of normal levels.

Southwest Airlines are now the largest airline in the world based on weekly capacity taking the crown from China Southern with those additional half a million seats added back, six of the top ten carriers are located in either China or the United States. Ryanair who normally rank 7th are currently languishing in 150th position and Indigo normally 10th are in 19th position; both airlines should in the next few weeks see their positions rise as they recommence services.

Network planners in many airlines must be extremely confused at the moment. Whilst some are adding back capacity from late June onwards others are working on significant short-term cancellations.  The two charts below show current capacity for both domestic and international services across the globe through to the end of the year with comparison to the same weeks last year.

The key two lines to follow are the changes in capacity filed by airlines in the last two weeks. In the last week some 60 million international seats have been removed by airlines from their planned services through to the middle of July as they adjust capacity to current demand expectations. In the last two weeks some nine million scheduled international seats were removed from this week’s flying highlighting the challenges that airlines are facing. 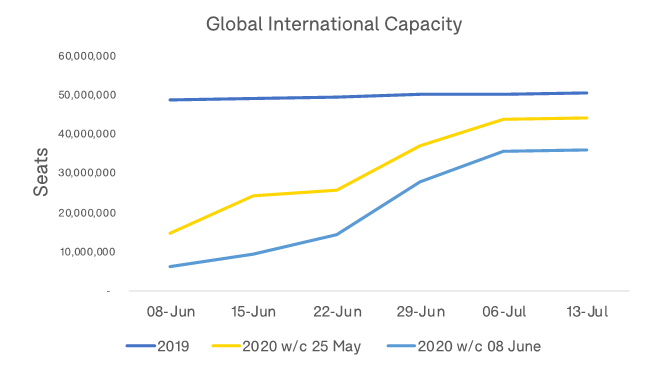 This week’s data for some may feel a bit flat; the growth of last week not being seen again. It never was going to be that simple; as we have said before climbing back is a lot harder for every airline than falling of a cliff. Until demand recovers, traveller confidence is restored and importantly bookings are made not just for the next few weeks but further out into September and October capacity growth is likely to remain patchy and spasmodic in nature; even though the airlines are desperate to fly!