We’ve been here before but breaking through the 80 million mark this week is perhaps a further sign of the recovery gathering pace and things beginning to return to normal. As always we will look in more detail at the data, but first this week we wanted to reflect on a couple of developments that occurred last week that suggest airlines and countries are continuing to get ready for the recovery.

The first was the announcement of a planned merger between Frontier Airlines and Spirit Airlines, which may have caught a few by surprise although we always felt a bit more consolidation was likely in the US aviation market. Any consolidation play during the pandemic would have had alarm bells ringing but as the whole industry now seems to be heading in the right direction taking such a step right now seems to make sense. The two carriers have much in common with similar operating fleets, similar sizes and positions in the market and as the two “before” and “after” charts below illustrate the merger does create a more solid carrier. 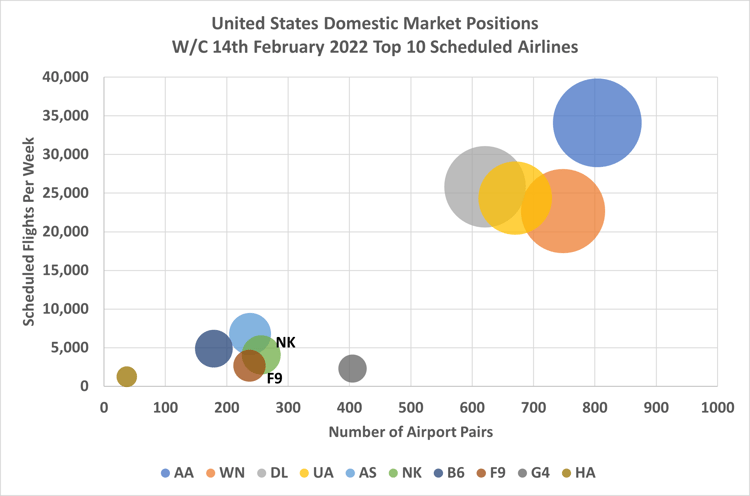 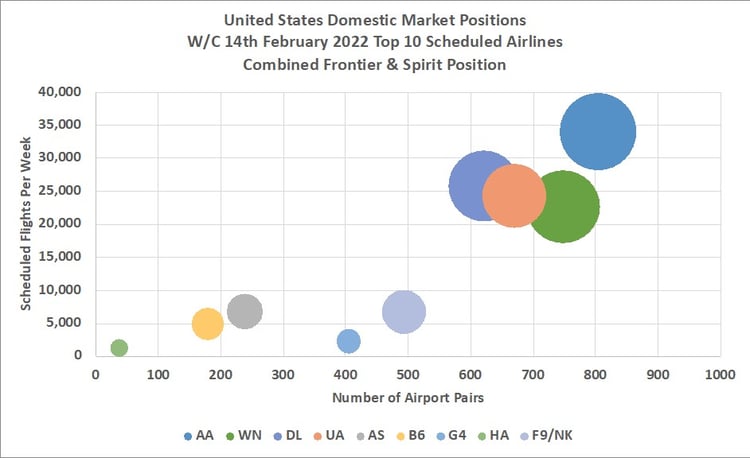 As a result of the merger, and if no concessions have to be made around the new network, then the combined entity certainly moves further away from a cluster of carriers with nearly 500 airport pairs served based on this week’s airline capacity. Depending on if you have a ‘half glass full or empty” perspective then the new carrier will have “created space” from its competition or become really a mid-market offering. Since the whole low-cost model operates on the assumption that big is beautiful we feel this development will in the long term be a strategic success if approved.

The other development last week was the surprise and sudden announcement that Australia would once again welcome international visitors from the 21 February. Airlines and support service providers in Australia had for a long time been asking for plenty of advanced notice of such a development so that they could plan resources, two weeks’ notice just about sums up how Governments have helped airlines generally with their decision making in the last two years. After all turning beef burgers over in McDonalds isn’t quite the same as turning an A380 around which is what some former handling agents have been doing.

It is therefore perhaps no surprise that there has been little immediate increase in planned capacity from airlines operating to Australia, in fact, planned capacity has slightly dropped! Yes, British Airways are returning to Sydney at the end of March, but that was already in the schedules and others may add capacity but for many airlines the opportunity to operate a full plane will be all they wish for.

So, with those headline insights out of the way, how does this week look? Well, as we mentioned global airline capacity has broken through the 80 million mark with a 1.5% increase week-on-week. Capacity through to the end of April fell by some 7.7 million seats; that may sound a lot, but it is less than a 1% adjustment down over the next three months; some weeks back the rates of change were much higher. So, yet another sign of increasing confidence in the recovery (he said optimistically).

North East Asia’s global dominance lasted all of one week as reduced airline capacity in China and growth in the United States saw the two regions change places once again. Similar to last week the vast majority of regions reported week-on-week capacity growth with only Upper South America joining North East Asia in reporting capacity reductions. The fastest-growing region this week is South Asia where capacity has increased by nearly 12% as India sees more and more services being added back. OAG will be running a dedicated India webinar in the next few weeks to reflect on how the recovery is shaping up with of course a new owner of the national airline.

This time two years ago we were just beginning to see the impact of Covid-19 around the globe with some countries closing borders and others wondering what to do next. As a result, there are some remarkable variances in the data when compared to the w/c 17 February 2020; for instance, North East Asia is plus 67% while the South West Pacific remains at -47% highlighting once again how every regional market and country handled the impact of the pandemic and have responded over the last two years; there really hasn’t been two similar experiences anywhere.