eVTOL Aircraft and the Impact on Commercial Aviation 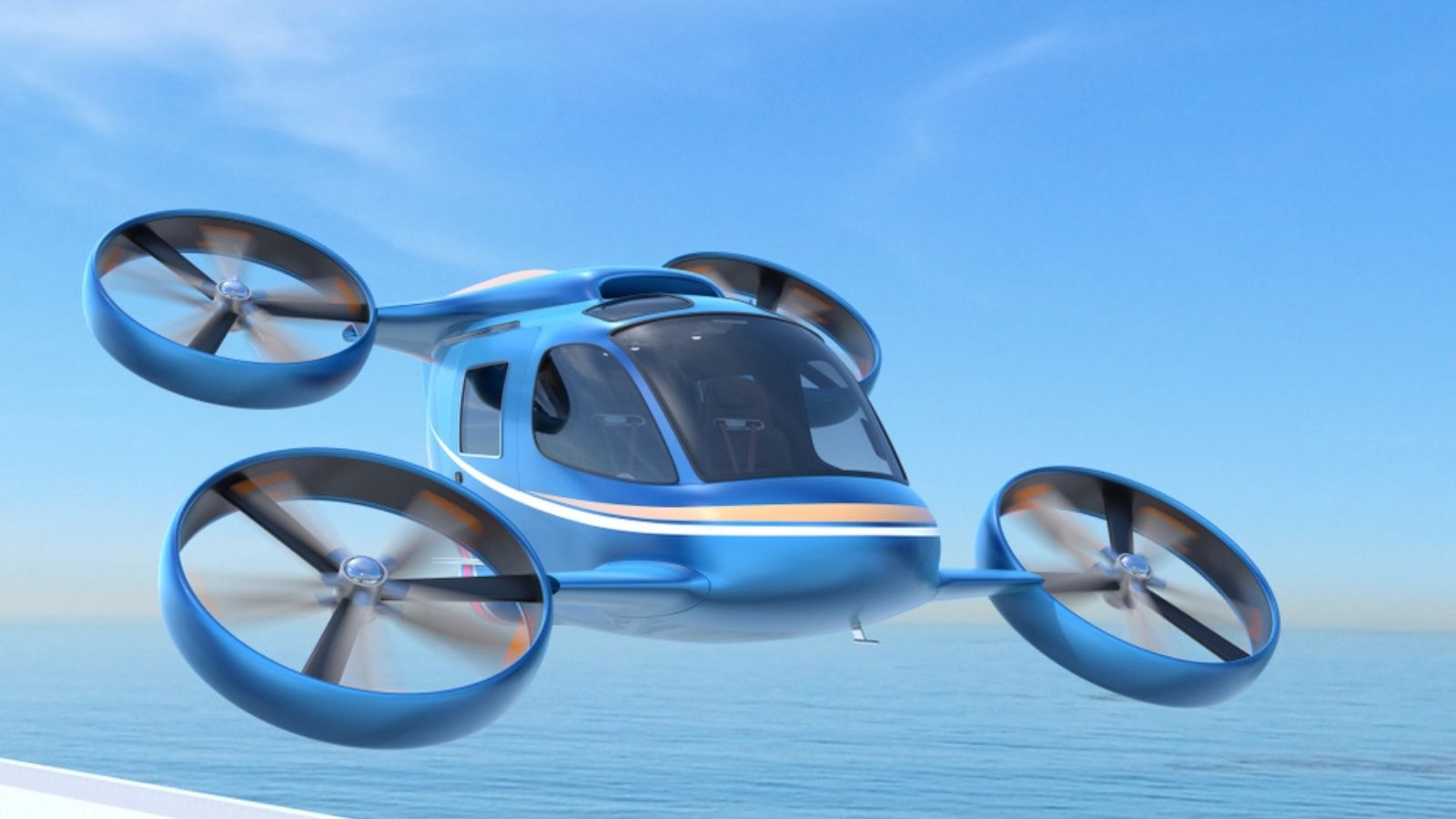 Are the skies about to get a whole lot busier? OAG explores the emerging world of electric vertical take-off and landing aircraft.

Is it an aircraft? Is it a drone? Perhaps it’s a taxi? Or, if you go by some of the hype, is it more akin to a supercar? Many people will never have heard of eVTOL but there is plenty of work going on behind the scenes to make Electrical Vertical Take-Off and Landing vehicles a reality, and eVTOL aircraft might quite possibly come sooner than you realise.

What are eVTOL aircraft?

eVTOLs represent the coming together of a number of technological advancements with the need to move away from fossil fuels and the changing way that we buy services. Brought together through the development of eVTOLs, there is an opportunity to take a major leap forward when it comes to moving people around our cities and the planet.

The size of the opportunity is recognised by the sheer investment taking place in this area, and the players developing prototypes. These span the aeronautical and aerospace sectors, car manufacturers and Artificial Intelligence (AI) community.

Speculation is that the first eVTOL aircrafts will enter commercial service around 2025, and these will be piloted, but unmanned versions might come within a decade of that. While eVTOLs may not be like-for-like competitors to commercial aviation, there are some markets where they will be playing in the same space and they have significant potential to disrupt the way we travel and move around. The challenge for commercial aviation will be in how to live alongside eVTOLs and incorporate the new way of flying into their business models.

The convergence of new technology, climate crisis, and purchasing behaviour is the reason eVTOLs are in development.

In terms of technology, recent years have seen major improvements in the performance of electric cars as part of the need to move away from fossil fuels. Improved battery technology has been a major factor in mainstreaming electric vehicles and making them a viable alternative to petrol and diesel cars. Alternative fuels, such as hydrogen fuel cells, have also made progress and are now being considered for aviation, although their commercial use is still some way off. The technological advances are now being applied to vehicles that can fly.

Drones are another area of technology which have developed rapidly in recent years, with both civilian and military applications, and point to a future in which highly manoeuvrable air-based vehicles could be remotely operated from the ground. Their use has spurred consideration of how airspace can be shared between different types of user, rather than simply being the preserve of civilian and military aviation and efforts are underway to create rules to allow for sharing airspace. Drone technology leads to questions about why aircraft need to be piloted and are there alternative models to how we fly aircraft today.

Another area of technology which is relevant to the development of eVTOLS is artificial intelligence (AI), potentially enabling autonomous piloting. Today, AI is a common feature in cars, drawing on data from sensors to improve the driving experience, decision-making and control systems.

Intrinsically linked to the technological progress being made is the growing recognition that everything we do needs to become less reliant on fossil fuels, as we work towards a sustainable future. Aviation continues to come under the spotlight for its CO2 emissions but with travellers reluctant to give up flying, more climate-friendly alternatives represent commercial opportunities for those who can exploit them.

The final factor contributing to the interest in eVTOLs is the way buying habits are changing. The likes of Amazon and Uber have transformed the way consumers purchase items, bringing the just-in-time model of manufacturing to the shopper and delivering products and services direct to the consumer in a timely way. The prospect of an environmentally friendly Uber-style on-demand air taxi has great appeal even if it still sounds as if it has come straight form a sci-fi movie.

It’s relatively easy to see eVTOL aircrafts used as an air taxi, a cross between a taxi and a plane. Typically, these journeys would be relatively short and most likely in urban areas. Terms such as Advanced Air Mobility (AAM) and Urban Air Mobility (UAM) refer to this use.

In many ways, helicopters were originally expected to provide this type of service but they have proved too noisy for routine urban use. With its electric power source, eVTOLs will be a much quieter alternative and we should expect to see some helicopter use replaced by eVTOLs.

Helicopters are often used for medical emergencies, getting people injured in remote areas to hospital quickly or transporting people to hospital where road congestion means travel by air is faster and preferable. Again, these applications could easily be transferred to eVTOL aircrafts in time.

Another area where electrical vertical take-off and landing aircraft could be disruptive is in cargo services, both delivering goods direct to customers, transporting goods in areas of the world where road infrastructure is poor and operating urban night time services, perhaps complementary to daytime passenger services due to the lack of noise associated with them.

Finally, among the obvious use cases, expect eVTOLs to provide an alternative transport method for some business travel. Think of the meeting where a handful of people need to travel a few hundred miles by road or rail. Or as a cheaper and more convenient alternative to business aviation with no need to travel first to an airport. The expectation is that electric aircraft such as these will be less expensive to operate than turboprops or small jets for this sort of journey.

Where does this leave commercial aviation? Will eVTOLs be a competitive threat? Will they have the sort of flight range more typically associated with commercial aviation? Or will they be a complementary service, integrated into the airline offering and shuttling passengers between their homes and the airport?

While eVTOLs have many selling points – the prospect of net-zero flying, the fact that they could be used in built up areas, and their potential to avoid the need for expensive pilots – there are obstacles.

Not least is the issue of the rules and regulations about shared airspace. While some regulators are working on this there remains a long way to go. Then there is the certification process for the vehicles and the difficulty of knowing what is required to certify a new technology as safe. Part of the delay in achieving autonomous eVTOLs will be the need to establish consumer confidence in the technology and the certification process, rather than the technology itself.

Then there is the infrastructure required. In the short term, airports and helipads may be the obvious platforms to operate services to and from, but in time it is possible to envisage a range of convenient and purpose built locations to pick up an air taxi from.

At some point some degree of integration will be required with existing transportation systems, whether that is physically or through integration of booking tools to enable connectivity between modes of transport.

While the expectation is that eVTOLs will be used for shorter distances, some of the prototypes in development are indicating that they might operate on distances up to around 500 km. In 2019 the number of scheduled flights under 500km was 10.3 million, or 26% of all commercial passenger flights. This basic analysis provides a powerful indicator of the extent to which eVTOLs could change flying. On the one hand, they could simply be alternative aircraft types, replacing the familiar turboprop and smaller jet aircraft used today. However, with the potential to change the way flights are booked and provided, they could be highly disruptive for aviation in general.

There are certain routes that will be more attractive to eVTOL operations.

The shortest routes, those under 100km, made up 2.3% of all flights in 2019. The largest of these routes are typically short hops between major cities and nearby islands, such as between Belize and San Pedro or between Dar es Salaam and Zanzibar.

The most frequently operated routes between 100km and 200km are similar, often crossing water and serving tourist demand.

Once we get to slightly longer routes, those between 300km and 500km the top routes are often between major cities such as Boston and New York (298km), Kuala Lumpur and Singapore (319km), and Osaka-Tokyo (460km).

Looking ahead, it’s possible to envisage eVTOLs making a significant impact in improving access to tourism destinations and especially island destinations, as well as improving mobility between cities within a region. Imagine how eVTOLs could transform flying around a region such as the Caribbean, providing frequent, convenient, less expensive and flexible patterns of flying between islands.

While the prospect of calling for an aircraft in the same way that we call for an Uber may seem fanciful and some way off, the advent of eVTOL aircrafts is not far off. Numerous companies are working on prototypes and are vying for funding from investors which appears relatively plentiful.

There may be some way to go in terms of getting certification and regulatory processes in place but there are working prototypes which point to the realisation of this new approach to mobility. Some commercial airlines as well as airframe manufacturers are already active in this area, ensuring that they understand and can contribute to the changes that are coming, rather than being caught off guard by industry disruption. American Airlines, Azul, United Airlines, Virgin Atlantic and at least one major aircraft lessor already have pre-orders for eVTOLs. Airport groups such as Groupe ADP and Fraport are partnering with others in the industry to make sure they are also ready for eVTOLs, and trying to shape the use cases for eVTOLs to include air taxi services to and from their airports, so that eVTOLs enhance their services rather than disrupt.

As always, there will be winners and losers but for those who have not yet engaged with how flying could change now is a good time to start.

Learn more about the future of travel.