The Consequence of Falling Oil Prices 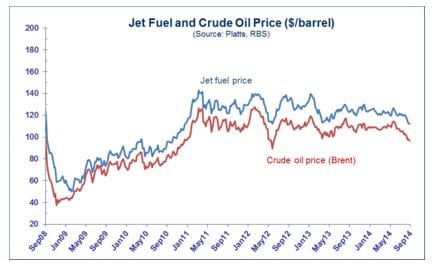 Contributing factors are the slowdown taking place in some of the world’s biggest economies, combined with excess world oil supply.  So what might this mean for the airline industry?  Data from OAG’s DOT Analyser shows that the US majors spent over $30 billion on fuel in 2013 and consumed over 10 billion gallons of fuel.  Fuel costs for these carriers typically represents around 27% of their operating costs, whilst for LCCs like Southwest and Jetblue, with their lower cost base, fuel costs are higher, at 34% and 38% respectively.

A report last year suggested that for the big four US carriers, every 1% change in the price of jet fuel resulted in an increase or decrease of nearly $138m in operating expenses.  So any shift in oil prices, and ultimately the price of jet fuel, would be expected to show a significant impact on airlines’ financial performance.

Unfortunately for most carriers, it’s not so straightforward.  Some carriers hedge fuel prices, meaning they are protected from steep increases, but also cannot benefit from sharp falls. American Airlines took the decision a few years ago to stop fuel hedging, so stand to benefit from today’s low prices and some other carriers have followed suit, or at least now hedge a much smaller proportion of their fuel requirement.

In Europe, carriers still typically hedge for up to two years ahead, and for a significant proportion of their requirement – meaning the benefit of today’s low prices will not feed through to their bottom line performance for some considerable time – on top of the summer of discontent some of Europe’s mainline carriers have faced. For European carriers, the effect of falling oil prices is also minimised due to the Euro being low against the dollar.

Today’s low oil prices will undoubtedly offer US carriers some protection against the threat of Ebola -  these carriers have seen stocks fall by 18% in the last month - and offer them a means of building their balance sheets back up.  But it’s unlikely that passengers will see any benefit in reduced fares, as there aren’t any significant increases in seat capacity, particularly in the US domestic market following the latest round of consolidation, and demand remains at the same level as last year.