How will Ebola affect the aviation industry? 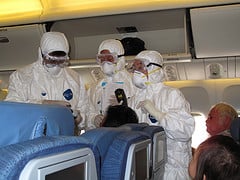 This week the Ebola outbreak in West Africa has had news pundits speculating on risks and outcomes. While facts are limited, opinions spread. And comparisons are already being made to previous global health scares from a  health, treatment and travel perspective.

The aviation industry, meanwhile, is watching the situation closely, careful to balance sensible precautions with activity which could in itself increase the perception of risk.  Travel bans have been discussed and discounted – on the basis that this might hinder efforts to contain the virus by stopping foreign aid workers from getting there – although several carriers have changed or suspended flights to Liberia, Sierra Leone and Guinea.

The current focus seems to be on ensuring airport screenings and safeguards are in place for flights from affected countries even though the risk of becoming infected with Ebola is extremely low, even for travellers visiting affected areas.

Obviously it’s too soon to say what the impact on air travel might be but a quick look at OAG’s Schedules Analyser shows that capacity to and from West Africa is still up 5.1% versus last October, although this falls to just 1% growth in November.  While fear is a major factor in people’s willingness to fly we know from previous global health scares that capacity can be affected by consumer confidence. In a research paper published in 2011, OAG found that global capacity took four months to recover from the impacts of the 2003 SARS crisis and, following the Mexican Swine flu epidemic of 2009, Mexican capacity took almost eight months to bounce back.

Aviation forecasters routinely build ‘shocks’ into their forecasts to allow for just these sorts of events. But the evidence shows that demand for air travel is so strong that, when the crisis diminishes, the public are keen to take to the skies again.