How to Outshine Your Peers - Punctuality League 2018 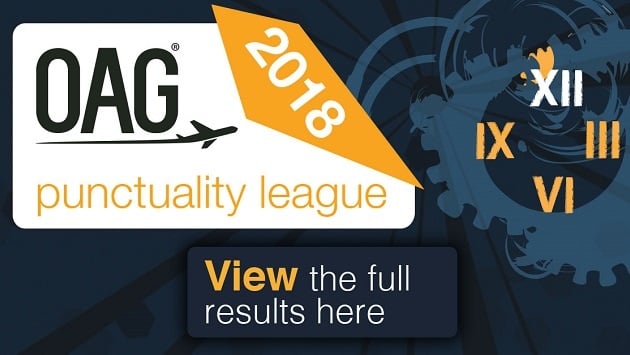 The moment when we transition from one year to another is always an opportunity to reflect on what has changed and what stays the same. The numbers may only change by a single digit – 2017 to 2018 – but the world is changing faster and the need for businesses to stay on top of business performance is stronger than ever.

With another year comes another look at the on-time performance of the world's airlines and airports in OAG's Punctuality League 2018.

With the New Year, OAG has pulled out all the stops in order to compile its annual review of airline and airport on-time performance (OTP). European carrier airBaltic makes a welcome return to the top of the league table as the only airline for which over 90% of flights arrive on time. Joining airBaltic in the top 3 spots are Asian carrier Hong Kong Airlines and American carrier, Hawaiian Airlines.

A welcome new angle on OTP data in the Punctuality League 2018 report is on-time performance for the largest global airlines and a chance to compare how the biggest and the best perform. Japanese punctuality maestros Japan Airlines and All Nippon Airways come in first and second place, with OTP of 85.3% and 83.8%, respectively. Delta Air Lines, the second largest operator of scheduled airline flights worldwide, comes in third with a very respectable OTP of 82.8%, while India’s fast growing low-cost carrier IndiGo makes an impressive appearance in fourth place with OTP of 81.2%.

Also new for 2018 is OTP for the Top 20 biggest Domestic Routes and the Top 20 Biggest International Routes worldwide and by airline. Hong Kong-Taipei had the highest number of international flights operating back and forth in 2017 of which 70.9% were on-time but OTP varied between airlines with the best managing to get almost 9 in 10 flights to arrive on-time, and the worst barely able to get half of operations to their destinations on-time. The highest density domestic route was Jeju-Seoul and 74.1% of flights arrived on-time.

See the full results of the Punctuality League 2018 by clicking the button below.